A Brave and Cunning Prince: The Great Chief Opechancanough and the War for America 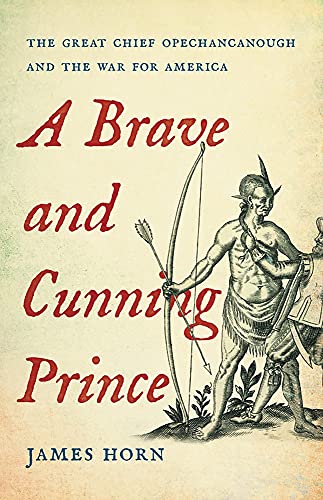 “James Horn has put together an incredible lost history of an important figure whose life decided the future of America and all that has entailed since.”

Aside from Vikings and any other people who arrived in America before 1692, Europeans from Great Britain, France, and Spain struggled for North America from the early 1500s on. Native peoples—the Indians—resisted almost a century before the settlement at English Jamestown. Until then, the Indians essentially won and the issue remained in doubt until the capture and death of Opeachancanough 1645.

Native-born, upper-class, first American Opeachancanough, appears first in Spanish records as Paquiquinjeo and lived at the beginning and the nearly what became the end of English America. ”His life reveals an epic that traversed the Spanish and English Atlantics.” He knew Spanish King Philip II, ruler of the greatest empire of that time. Opeachancanough remains largely forgotten today, however.

Author James Horn lays out a compelling case that Paquiquinjeo and Opeachancanough are the same person. The author’s proof goes beyond the seeming similarity in how the same (?) name might be pronounced in Castilian Spanish and in Elizabethan English.

Captain Antonio Velázquez took Paquiquinjeo from the Chesapeake to Spain, supposedly as a volunteer and the son of an Indian leader in 1561. Author James Horn, as part of his effort not to lose the perspective of the native peoples, believes that the Spanish kidnapped Paquiquinjeo, as they did many native people they enslaved.

The boy from the sparsely settled forests of the Chesapeake would receive the new name of Don Luís, survive a near-fatal illness, and spend years in the palaces of Cuba, Mexico, and Spain. He experienced all of the complex parts of this first European New World, and he received a formal education.

The young Native American found himself a pawn in Spanish King Philip’s rule of the world’s first truly global empire. At that moment, French pirates robbed the Spanish Main of the Caribbean and would soon try to establish a pirate base near today’s Jacksonville, Florida. The Spanish destroyed that colony and established a chain of settlements north of St. Augustine, Florida, along the east coast of North America.

Having spent nine years with the Spanish, Don Luís seemed the perfect agent for an experimental non-military mission outpost in his native Chesapeake. The new strategy became to establish and maintain peaceful relations with the natives. From a mission, souls would find Christ, the coast would not become a pirate’s nest, and routes to the interior might find gold and easy routes to Mexico and the Pacific Ocean.

Back with his own people, Don Luís/Paquiquinjeo betrayed the priests and had them slaughtered but for one boy he spared and who escaped to tell the tale. Other tribes and pirate raids steadily wiped out the Spanish missions and outposts until only St. Augustine remained. Spain would repeatedly send ships to the area but never again establish an outpost in the Chesapeake.

Times had changed. The different peoples on the coast formed confederations to ward off attacks from other and different natives from the interior and, likely with advice from Paquiquinjeo, to hold back the Europeans. Not all of his people trusted him, however. The Powhatan chiefdom conquered neighboring tribes sometimes by genocide.

“In the long run, however, the greatest threat to Powhatan’s and Paquiquinjeo’s rule would from across the Atlantic.” In the 1580s, the English established a settlement on the coast of today’s North Carolina. The neighboring tribes went to war.

In the two decades that followed, Don Luís/Paquiquinjeo became Opeachancanough, leader of the Pamunkeys and principal war chief of the Powhatan chiefdom. He now faced the threat of a new settlement of English, the famous and first permanent settlement of Jamestown.

Much of A Brave and Cunning Prince discusses the negotiations between the now forgotten Opeachancanough and the now famous colorful memoirist Captain John Smith who claimed to have saved Jamestown. Understanding what transpired between these two figures proves complicated beyond just Smith’s exaggerations and literary inventions.

James Horn argues that the two men were separately determined to decide the future of America.

Opeachancanough had a strategy to assimilate English into his chiefdom, at least as a source for guns. The tribes had successfully used other European products as weapons. Smith, however, dreamed of gradually exploring, conquering, and settling North America as an English continent.

The famous story of Opeachancanough’s niece Pocahontas/Matoaka saving Smith may not have happened, but the relationship between the all-powerful chief and the English broke down by 1608. A siege of Jamestown nearly forced the abandonment of the colony. The situation deteriorated so far that the Spanish canceled plans to send a fleet to attack the Jamestown colony. Only a last possible moment arrival of a relief fleet saved the settlement.

“Five years of sieges, vicious raids, brutal killings, and the systematic destruction of villages, livestock, and crops” followed as thousands more English settlers and soldiers arrived at Jamestown. Powhatan and Opeachancanough did not appear to have directly led the war effort but it consisted of individual tribes. Opeachancanough finally reached a peace settlement, one soon secured for the moment with the marriage of Pocahontas and Englishman John Rolfe.

“Both sides clearly understood that the war had been about who would possess the land.” Stopping the English expansion now became a forlorn hope “by the sheer scale of the English influx that followed the tobacco boom” famously encouraged by his niece Pocahontas and her English husband.

On March 21, 1622, after four years of peace, Opeachancanough launched an attack on the unsuspecting English settlements with a native army that he had secretly worked to assemble for years. “The attacks were devastating.” On the first day, the natives killed between a quarter and a third of the settlers. English immigrants died from violence, starvation, and disease.

Opeachancanough disappeared for seven years and then returned, now as the official leader of the Powhatans. He finally agreed to peace in 1630. On April 12, 1644, now in his nineties, Opeachancanough launched one last great war against the Black and white Virginians.

The great “emperor’s” forces had shrunk considerably since 1622, but he hoped to take advantage of England’s then-current civil war. By the summer of 1645, whatever chances he had for success had passed as his “alliance began to disintegrate under the incessant English onslaught.” The war officially ended in 1646.

After his capture, the old warrior, now nearly 100, was assassinated by a soldier. “Opeachancanough’s life spanned a century of massive changes in America and Europe.” Ironically, his Pamunkey people still live on land he fought to protect!

James Horn has put together an incredible lost history of an important figure whose life decided the future of America and all that has entailed since. The author makes a notable contribution to American history but also achieves a remarkable feat of scholarship in successfully exploring the three different worlds in the 1500–1600s.

The story never bores the reader or adds too much detail. “For the convenience of the reader,” the author “altered the spelling and punctuation of historical passages to conform to modern conventions and converted dates to the modern calendar.” A Brave and Cunning Prince has annotation, a “dramatis personae,” illustrations, and a chronology. A list of illustrations would have been nice.