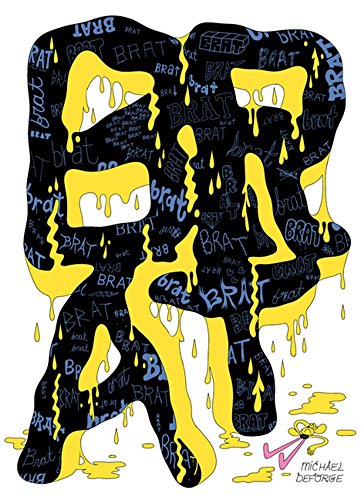 “Deforge has created a little book that’s both funny and disturbing.”

Michael Deforge’s wonderful new graphic novel Brat mocks both celebrity culture and performances of rebellion. The titular brat, Ms. D, is an aging “juvenile delinquent” in a society that treats grotesque and destructive behavior as charming performance art. She enters the story naked and showering, commentating her own existence through the fourth wall with cynical aplomb: “I’m 33. No longer a ‘juvenile’—but I suppose this is the title I’m stuck with. As for the ‘delinquency,’ my actions were originally politically motivated, but I guess the whole thing got away from me. And I have to stay true to my fans.” Now dressed and walking down the street, a fan pops out with a request: “Would you smash my window? My husband is a big fan!”

The premise may sound heavy handed, but Deforge’s warped artwork and cynical-yet-engaged characters make it work. From rock ’n’ roll to YouTube, adults have worked at pretending to be badly behaved adolescents. If they’re not usually doing so this literally or self-consciously, well, that’s a failure of imagination on their part.

Ms. D’s late-career ennui collides with the earnest engagement of her (unpaid, naturally) intern-cum-personal assistant, Citrus Chan, a young woman dedicated to juvenile delinquency with a fervor that prevents any actual delinquency. Only the most dedicated young woman could ever expect to break into the delinquency business. She must be willing “to quit school. To change your name. to go underground. To drive a van. To commit treason. To read a very long book. To watch the life go out of an animal’s eyes.” But in practice, Citrus answers phones. It’s stable work. Her future is assured.

In contrast, Citrus’ boyfriend sows chaos wherever he goes, gets fired from his job (for coating a burn ward’s window in raw egg), mutilates his grandmother’s lawn, and gets into college. His delinquency isn’t recorded. He’s invisible, an unpleasant force within a largely idyllic suburban community. But he’s not a delinquent, not really. He doesn’t even have a YouTube channel.

Ms. D’s attempts to detox carry an existential dread reminiscent of Bojack Horseman, but their melting illustrations go far beyond those “edgy” limits. As D. dissolves into misery, Citrus becomes the adult in the relationship. D.’s most juvenile behavior in the book comes when she’s performing adulthood: “Citrus, this is what healing looks like. Get used to it. You’ll be doing a lot of it in your life. It’s basically all any of us do past the age of twenty-five. I can’t stand myself, so I’ve hired you to do it for me. This is called ‘delegation.’”

Citrus’s crisis comes not from the crimes Ms. D asks her to commit but the looming potential of ordinary life. When she and her boyfriend are both accepted to college, what’s a furious girl to do? “I didn’t expect us both to get in. I thought maybe I wouldn’t get in, and you would, and I’d resent you for it. Or maybe the reverse. . . . I’m glad we won’t have to face some sort of dramatic hardship.” But how far can “glad” carry you when you’ve based your life on fury and rebellion? The last thing Citrus needs is to get what she wants. At this rate, she’ll be happy, successful, and middle-class in no time.

Deforge has created a little book that’s both funny and disturbing. His parodies of social media and new media (“hot journalism”—journalism conducted by hot people, of course) burst with playful irony. But his exploration of what working in these media means is subtler, smarter, and altogether more engaged than that. It’s sneaky. It’s mean. If anything is left that deserves anything, Deforge’s book deserves to be read.