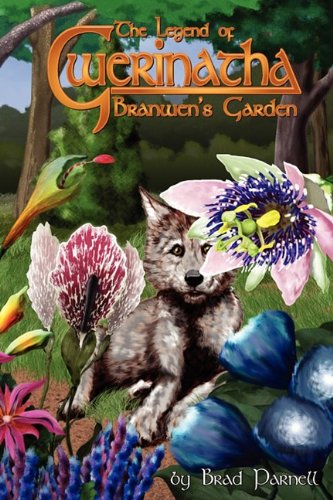 Brad Parnell is first and foremost an illustrator. His debut novel, The Legend of Gwerinatha: Branwen’s Garden would have better suited a children’s picture book or possibly a young adult graphic novel. The plot is too simplistic to stand on its own without intensive visual support.

Robert Moore discovers a key to Gwerinatha, an alternate world where his ancestor is thought to have disappeared over 300 years ago. He enters a dangerous land teeming with poisonous plants and malformed creatures. Animals talk, and Robert quickly befriends the young wolf, Louie.

The two of them set out to rescue the governor’s daughter, Branwen. Gwerinatha is currently divided over civil strife. The southern House of Fates has been against the northern Lords of Wisdom since Robert’s ancestor, Samuel Moore, walked away from his flock. Samuel was the first person from the real world to discover Gwerinatha, and he had brought a group of English pilgrims with him. He had hoped to set up a civilization based on free choice and a lifestyle based on the common good. However, things spiraled out of control, culminating with the kidnapping of Branwen by the Southern Guard.

Branwen is a remarkable 16-year-old girl. She is an activist fighting to preserve the natural habitat and the animals that reside in it. Her garden in the midst of wolf headquarters exemplifies her beliefs. Here’s how Robert describes her: “It wasn’t that she was cute or had a great personality or anything like that, though she was extraordinarily attractive in every manner conceivable. I just couldn’t get over how someone so young could stand up to so many authority figures for principles that she believed in so strongly. She was willing to risk her safety and comfort for others.”

Along the way, Robert and Louie team up with Branwen’s younger sister, Seren; a two-mouthed donkey, Gefell; and a guide from the Village of Idiots named Borb. They wander through 19th century-style towns and barren wastelands like the Unfinished Lands where they encounter the self-exiled Samuel. Inspired by young Robert’s enthusiasm, the esteemed patriarch agrees to help them rescue Branwen and come back to advise the governance of Gwerinatha. However, a host of monstrous creatures—not to mention the Southern Guard—stand in their way.

The strength of Parnell’s work is in its imagery. The creatures, the landscape, the clothing—all deserve his illustrative touch. Some of the chapters are introduced by a graphic, however the entire story would benefit from extensive full-color illustration. Its scope resembles that of a fairy tale, and a younger audience would appreciate a concrete interpretation of Parnell’s vision.

Overall, the images issuing from such a creative mind deserve to be fully captured on paper.