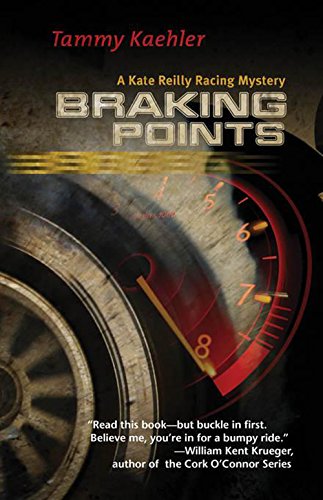 “. . . shows how acting like an adult and staying true to yourself and others is the way to success in any pursuit.”

Few novels cater to the auto sporting community, and fewer still convincingly portray any form of car racing, but Braking Points does both in the guise of a spirited mystery.

While it’s unclear whether the author herself is a driver, it’s evident that she listened to experienced people and/or had them vet the manuscript. Sports car racers will nod in recognition and have no reason to laugh at bloopers. Many will recognize the tracks featured in the story (and appreciate the course maps of Road America and Road Atlanta the author supplies).

Unfortunately, in order to make the milieu appeal to a wider audience, automotive details that would delight motorheads take second place to the mystery, which is: Who is trying to kill rising star Kate Reilly and why?

Kate faces challenges aplenty in just trying to advance in a male-dominated sport. Most of her brethren welcome her and treat her as an equal, but many still resent her—especially after she’s involved in a wreck that injures a famous driver. Some of his rabid fans blame her even though both drivers were at fault and acknowledge their responsibility. She becomes a target of hate mail, death threats, and a persecution campaign through social media.

Then bodies begin to drop. First, one of her best friends; next, the obvious suspect for both that murder and the slander against Kate. That leaves an open field of possible enemies, one of whom tries to run her down on the street and sabotages her track gear.

Kate struggles to maintain composure against unfair accusations and public humiliation. Her tormentor knows just how to impair a racer who must rely on concentration and self-confidence to succeed.

But Kate demonstrates her moxie by never succumbing to self pity or depression. Supported by friends and family, she stays focused on simple wisdom—“You can’t change how others behave, only how you react”—so she always gets her feet back under her and keeps her eye on the prize.

Although the book never deviates from the road racing milieu, it’s less about cars and competition than it is about sponsorship, fans, media, and relationships; more about proving oneself than beating others. In many respects, Braking Points serves as an ambassador for road racing. Through her story, Ms. Kaehler reveals how the sport works and highlights the greats in the field.

The author keeps the logistics in the background, never clogging up the narrative with too much information. Driving moves to the foreground, however, during Kate’s two races, when the reader gets to ride around the track with her in a 400-hp Corvette.

The author also avoids the temptation of making Kate a superheroine. Other racing stories end, for instance, with the main character winning a do-or-die championship all by his or her own wonderful skill.

Braking Points reflects reality by having a team shooting to (1) finish every race, then (2) do so without mishap, and finally (3) push for a podium position and standings in the American Le Mans series—all added to finding out who’s messing with their key driver and how to make him or her stop.

Kate finally finds the killer in the most unlikely corner of her world, using the skills that make her a great driver to save herself and take the enemy down. No damsel being rescued in the nick of time in this novel! Yet Braking Points doesn’t swing the other way and get militantly feminist, either.

No, Kate is a good role model for equal opportunity. She learns how to balance the masculine and feminine aspects of her nature and shows how acting like an adult and staying true to yourself and others is the way to success in any pursuit.