Brain on Fire: My Month of Madness 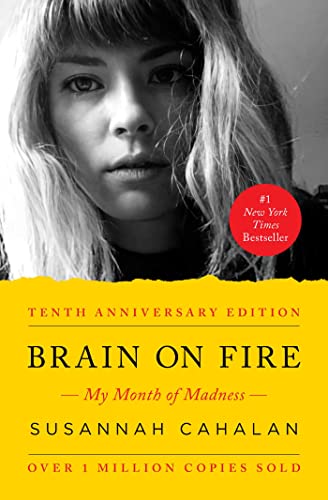 “My arms suddenly whipped straight out in front of me like a mummy, as my eyes rolled back and my body stiffened. I was gasping for air. This was the start of the dark period of my illness as I began an existence in purgatory between the real world and a cloudy fictitious realm made up of hallucinations and paranoia.”

In author Susannah Cahalan’s words above, she describes her nightmarish ordeal in both a visual and visceral manner that sets a dramatic stage for her descent into the abyss.

In this surreal true story, a brilliant account of Ms. Cahalan’s experience is painstakingly pieced together resulting in a powerful book entitled Brain on Fire: My Month of Madness.

Her story is both shocking and memorable. Her recovery is nothing short of miraculous. She is quite aware that if it hadn’t been for a very special doctor and the support of her family and partner, she may have been left to languish in a mental hospital—or worse.

Out of the blue while working as a successful reporter at the New York Post, Ms. Cahalan was struck with a malady that no one could figure out. Along with delusions, crying uncontrollably, and a series of dramatic seizures, her entire body became her worst enemy.

The symptoms presented as those similar to autism and/or schizophrenia. Not quite aware of what was occurring, she eventually felt a loss of identity, shame, and a fear for her future—if she even had one.

Stumped by the unusual cluster of both physical and mental distress doctors remained in a quandary. Her blood panel—which tested for numerous possibilities including lupus, M.S., Lyme disease, tuberculosis etc.—was negative for all the known possibilities.

In the meantime her family and boyfriend were highly concerned that she would never again be herself. Her short-term memory was nonexistent, and her communication skills were minimal.

Finally, after painstakingly investigating the brain functions as well as examinations of various portions of the brain, a diagnosis of Anti-NMDA encephalitis was announced. But her family wondered what the heck that was and what it would mean for Susannah’s future.

In short, Anti-NMDA encephalitis was first diagnosed in 2007 and Ms. Cahalan was only “the 217th person worldwide to be diagnosed since that time.” It is a rare autoimmune disorder involving the receptors critical for memory, learning, and behavior that also causes inflammation of certain portions of the brain.

She was informed that “even with proper treatment, there is still about a 23% chance that someone with it will be permanently disabled or die.”

As Ms. Cahalan ventured on her journey with treatment, coupled with unwavering support from her family, she slowly became stronger and began to heal. The time soon arrived when she felt well enough to return to work—the single most important factor in regaining her self-esteem.

Her editor asked her to write a first-person article about her illness and she happily plunged into the assignment. As a result of her work she began to seek out and network with people across the country that had the illness or were family members seeking hope for their loved ones.

As she connected with others, she became acutely aware that she was helping both herself and them so that no one had to go through the ordeal alone.

Piecing together her memories of that time was difficult at best but with help from others who were gathered around her, author Cahalan diligently and tirelessly developed and wrote Brain on Fire: My Month of Madness.

Readers will be mesmerized by this intriguing memoir. The book delineates both the limitations and the miraculous wonders of medical science. By the end of her treatment, Ms. Cahalan’s medical bills were approximately $1million. She was extremely fortunate to have had both great medical coverage and a brilliant doctor.

While reading Brain on Fire: My Month of Madness, one may soon become aware of the benefits of having some knowledge of medical terminology or at least a minimal awareness of the how the brain functions. Nevertheless, a lack of understanding of the basics does not detract from the power and impact of the underlying story, which is thoroughly engrossing.