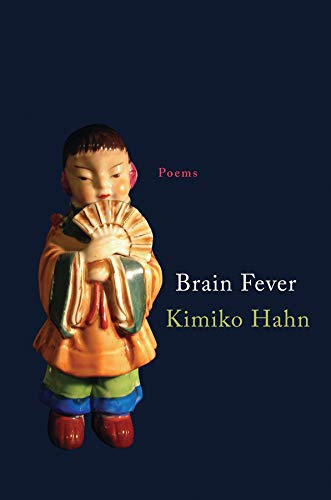 “Author of nine books of poetry and winner of prestigious awards such as the American Book award, a Guggenheim Fellowship, and more, Kamiko Hahn writes poetry that is innovative, resisting any kind of simple categorization.”

Encephalitis is an inflammation of the brain, infectious in origin. An obsolete term for it is “brain fever,” a term also applied to people who experience fever and delirium due to a severe emotional shock.

Brain Fever is the title of Kamiko Hahn’s latest book of poetry, which explores a universe we have barely begun to explore: the mysteries of the human mind, including the puzzles of love, memory, consciousness, dreams, and time. Themes of identity, sexuality, parenthood, violence, and grief surface in various poems.

Hahn combines ancient Japanese aesthetics with quotes from articles relating scientific research on many aspects of the brain and of the wider universe. The poems are characterized by word play and employ many devices: lists, intermittent repetition, quotations from news articles, word associations and puns, and pivotal words that move the progression of poems away from the linear.

Quotations from articles, especially pieces found in the New York Times (several by Benedict Carey) frequently make their way into the poems. In the section of the book called “Time,” quotes from articles on scientific exploration of aspects of the brain are used as titles. Facts and ambiguity play off of each other within the collage technique employed in many of the poems. This seems appropriate for the subject matter in which either a strictly measurable or completely subjective approach would be inadequate.

Author of nine books of poetry and winner of prestigious awards such as the American Book award, a Guggenheim Fellowship, and more, Kamiko Hahn writes poetry that is innovative, resisting any kind of simple categorization. Readers who prefer narrative poems or strictly lyric poems will have a hard time with Hahn’s work. It can be difficult reading, but rewarding.

In “The Secret Lives of Planets,” most of the lines in the poem come from an article by Dennis Overbye called “Now in Sight: Far-Off Planets.” The poet arranges lines to suggest an association between certain heavenly bodies and human parents. The poem ends this way, with the last two lines written by the poet, and the other lines, from the article, chosen and arranged by the poet:

giant planets in the outer reaches, (leave) plenty of room for smaller ones to lurk undetected in the warmer inner regions—

whether parents are really failed stars—

Parents as failed stars, mirrored (in each other, in their children?), warped as all fallible persons are, the ones we look up to when we’re small, but who generally can’t sustain our expectations. The problem children have of creating their own identities, apart from their parents . . . so much is suggested here, but the readers have to do some of the work.

In “The Problem with Dwarfs,” Hahn weaves observations about dwarf stars, and the ways they differ from larger stars, with the idea of short stature in human beings.

My view on dwarf stars involves my mother-in-law

who, before I married her son, described my height as such

to dissuade him from marrying me (or anyone). No matter…

compared to giants, dwarfs are cooler.

“Cooler,” of course, can be taken literally, as a description of temperature, or subjectively, as in the kind of people who are considered cool.

Her poem “Resilience” surprises. It begins with the fact that

A single drop of rain can weigh

fifty times as much as a mosquito and yet

the insects flies through a downpour without injury

and goes on to explain how the mosquito’s anatomy helps it pull through the drop of water, helps it “go with the flow,” like a boyfriend “trained in aikido.”  The poet goes on to talk about how knowledge like this helps people design robots:

we learn: ‘If you make it very, very small,

you basically don’t have to do anything else

Then the poet goes on, in two and a half lines to shock us with a simple statement of violence that implies the boyfriend exhibits great resilience, although the reader is not thinking of the boyfriend at that point in the poem; he was only mentioned very briefly in the earlier part of the poem. Perhaps he made that traumatic event “very, very, small . . .” in his mind, so as to be able to go on.  In this poem the writer seems to be manipulating her readers coldly, but artfully.

Brain Fever is not a comfortable book of poetry; it’s an ambitious, sharp-edged inquiry into the mysteries of the human heart, the mind, and some of the wonders of the universe. The poet’s stunning interweaving of word play and associations with details from scientific research makes it a fascinating read.