The Brain That Changes Itself: Stories of Personal Triumph from the Frontiers of Brain Science 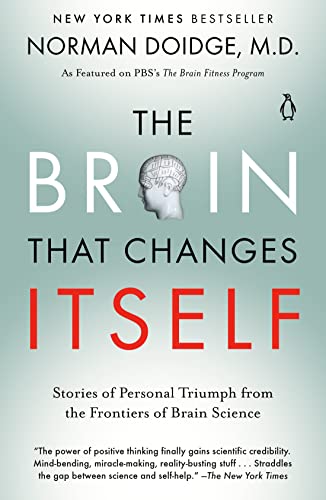 Norman Doidge’s book, The Brain That Changes Itself, helps to usher in a new branch of brain science called neuroplasticity. The conventional medical model has held that brain functions are tied to a specific brain area—the localization model. Doidge contends that the brain has a tremendous capacity for adaptation and that, with therapy, the brain can reroute functions to different areas.  Doidge cites examples of patients with learning disabilities, traumatic brain injury, and even patients with parts of their brain missing! Building upon the work of Paul Bach y Rita, Doidge cites a number of case studies of patients who have triumphed over incredible odds in their journey through rehabilitation. At times however, the book trends toward the genre of feel-good, positive thinking, self-help literature. While Doidge does make clear that the therapy required is often intense and progress can be agonizingly slow, his tone is one of “anything is possible.” We are left to wonder why localization of brain function exists at all. It would seem that there are evolutionary preferences for such a system, as it is evident in most individuals. The good news is that, with effort, patients can retrain and rewire their brains to overcome deficits. The bad news is that the brain becomes less plastic as we age. Also, it appears that the change must be mostly self-directed; that is, the patients that are successful are also self-motivated. It’s less clear whether physician-directed therapy can attain the same results. Still, Doidge’s book is a triumph, challenging deep-seated institutional biases. It gives hope to those who sorely need it, and perhaps something better—results. Reviewer David Hersman is a multimedia producer and father of a child with autism and epilepsy.