Boys in the Trees: A Memoir 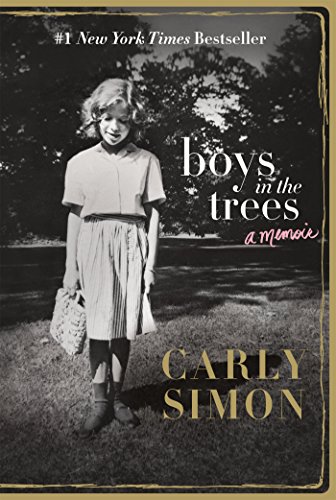 It’s easy to think of Carly Simon—gorgeous, tall, and talented—as swanning through her charmed celebrity life. She is, after all, the daughter of Richard Simon, founder of Simon & Schuster publishers, the onetime wife of music legend James Taylor, and the singer/songwriter of a string of hits including “You’re So Vain.”

Not too shabby. But in Carly’s intelligent, emotionally wide open new memoir Boys in the Trees, she wants you to know her life has not been the cakewalk we might imagine.

And she actually does a good job of proving her point as she recounts her life, from that of a young child bouncing around on Martha’s Vineyard to her divorce from James Taylor, a major drug user while married to Carly. Not surprisingly, Carly’s marriage and love affair with Taylor is the centerpiece of her life. The couple has two children and lifelong ties to Martha’s Vineyard where they set up their home. It would have and should have been idyllic except that Taylor, as described by Carly, is someone who makes everyone around him walk on eggshells.

In one particularly uneasy passage, J. T. belittles Carly with his supposedly superior intellect after she complains about some odd-looking bath water. She writes that her once affectionate husband turned on a dime: “Undergoing an instantaneous personality change, James stared at me, his face pinched and condemning, blurting out, as if in response to the most egregious comment ever uttered by anyone even, ‘Haven’t you ever heard of emulsification?’”

It’s almost funny except that good old J. T. was not laughing—he was dead serious and Carly knew it and immediately began compensating. “I made a list of other words and phrases that might catch me unaware and off-guard in the future, including détente, creosoted posts, and perestroika. Who knew what might come next?”

You don’t need to be a marriage counselor to know that when you start making lists of words your partner might use to question your intelligence, the marriage is kaput, to use a word no one needs to look up in a dictionary.

If you’re thinking Carly has a lifelong inferiority complex, you’d be correct. She names it “the Beast” and develops a stammer/stutter as a child after her incredibly selfish mother moves a much younger lover into the family home while Carly’s poor father is suffering from heart problems and trouble at work. He’s banished from his corner office at Simon & Schuster and, figuratively, from his own bed at home. The guy is literally gasping for breath while Carly’s mother is off screwing a 19 year old via a secret door in the same house. It’s enough to make any child develop psychological problems.

But as rough as Carly’s life is on the home front, the story of her career does seem to be charmed. She practically falls into becoming a rock star. She insists she never wanted to be a performer because of her stammer and stage fright, and was happy to be second banana to her older sister Lucy as they toured ’60s nightspots as The Simon Sisters. They had their fare of success as they opened for the likes of Woody Allen, Judy Collins, and Randy Newman.

But when Lucy elects to get married and give up on singing, Carly decides to become a songwriter with friend Jake Brackman who seems to have a direct line into Carly’s psyche. It is he who writes most/all of the lyrics for Carly’s first hit “That’s the Way I Always Heard It Should Be.”

At the time, Carly insisted to anyone who would listen that she merely wanted to be a songwriter/composer. Friends wheedle her into the studio and, before you know it, she has a record and hit single, but still fights stardom.

Despite that declaration and, seemingly almost against her will, Carly finds herself opening for Cat Stevens at the Troubadour in Los Angeles; it is her very first gig.

In short order, she’s sleeping with all the big names, including Cat Stevens (she writes “Anticipation” while she waits for him to show up at dinner) and movie stars Jack Nicholson and Warren Beatty. Carly goes out of her way to explain Beatty’s appeal. Yes, he’s a cad but he always calls the day after sex, remembers every single detail about your life, and shows up at your door to physically carry you into the bedroom. It’s clear she thinks this would be a better world if all men were like Beatty.

In one hilarious anecdote, Beatty shows up at Carly’s apartment near midnight and leaves at 5:00 a.m. By 11:00 a.m., she’s at her shrink’s office recounting the night. When the shrink blanches, he admits that she’s the second woman (out of three patients) that morning who has confessed to spending the night with Beatty.

The stories of the celebrities Carly meets are delicious as she drops one big name after another. Early on, barely out of her teens, she and sister Lucy take a cruise where both sisters flirt shamelessly with Sean Connery who politely tries to urge the youngsters into a ménage a trois. Eventually, he “settles” for Lucy which drives Carly into a jealous sister fit.

The irony that later in life it is Carly who writes the title song “Nobody Does It Better” for a James Bond movie (with Roger Moore) is not lost on Carly.

There are surprises in this book almost to the very end. Her lifelong fear of performing comes to a head toward the end of her marriage to J. T. when she is worn down emotionally and physically. One night in Pittsburgh, she finally has a panic attack on stage. She tells the audience what’s happening and invites them up to come up and sing with her. Dozens wind up sitting next to her on stage where she has a mortifying heavy period that causes her to bleed through her dress and flee to the wings.

Could anything worse happen? Almost. Officially separated from Taylor, he enters the apartment one day when dropping off the kids, looks at Carly and spits out, “Strip, bitch.”

Incredibly, she does, locking her bedroom against their children. “I was in heaven that lust had toppled him. I felt I was Orpheus leading Eurydice out of the underworld, not daring to look back until we had at least reached the upper air. But unlike the myth, and despite the gender roles being reversed, I never looked back, and James still disappeared.”