The Boy Who Harnessed the Wind: Creating Currents of Electricity and Hope (P.S.) 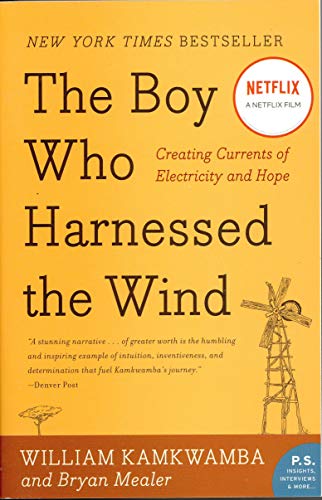 "Look,” someone said, “He’s made light.” That one simple phrase illustrates the courage and ingenuity of a young man seemingly trapped in the poverty and hopelessness of a tiny hamlet in southeastern Africa. William’s personal light of literacy and curiosity and learning took him far beyond the confines of his situation. Throughout The Boy Who Harnessed the Wind, William reminds us that there are still places in the world where even access to hot, plentiful meals and books is rare. But what he does with what he has is incredible.

The story of William’s journey from a fourteen-year-old boy’s isolated existence without education or money to a young man sparking a world-wide project improving the lives of his countrymen is fascinating. Although his descriptions sometimes reflect simplicity and a still-growing understanding of the world, they also give us a clear picture of a young man driven to better his life and the lives of those around him. Armed with only a few textbooks and a great willingness to question and explore, he built primitive windmills, first to power his radio, and later to shed light on his room, his home, and his village. He used his growing knowledge of electricity to fashion a water pump for his mother. His hopes of bringing electricity to his people “no longer seemed like a madman’s dream.”

Especially touching are the human portions of this story: William’s first realization that he might live his life toiling in the fields, facing illness and ignorance; his hunger pains during the height of the famine; his tale of his mother’s bout with malaria; his friendships with boys who were attending school when his family could not afford to send him. In each, we see a bright mind and a strong determination, willing to experience struggle, frustration, and yes, even ridicule, on the way to his dream.

With the help of co-author Bryan Mealer and many mentors and advocates introduced along the way, readers walk the dusty trails and soggy bogs near William’s home in Malawi, climb the tower holding his “electric wind,” and eventually travel across the globe to share his story. We stand outside the schoolhouse, feeling his longing for a chance to sit in one of those chairs and learn, but we do more. We turn with him from the schoolhouse to the scrap yard, from the landscape to the library and, in the process, we see a young mind expand, inquire, and grow.

Beyond being a “good story,” this book gives its readers a rare chance to be involved in extending the real-life story of hope and to understand the power of the human spirit to overcome great adversity and singly make a difference in the world—to build windmills of our own.