The Boy with the Perpetual Nervousness: A Memoir 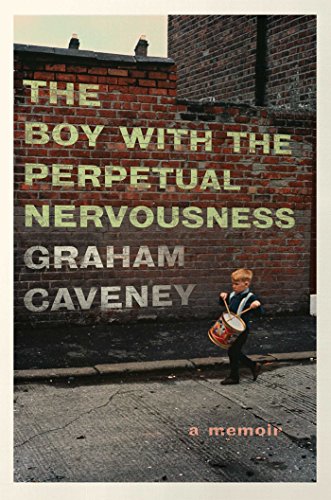 Nearly halfway through The Boy with the Perpetual Nervousness, Graham Caveney’s captivating and sometimes sickeningly vivid memoir of a North of England adolescence blighted by sexual abuse, Caveney envisions his torment brought to the big screen in an Alan Clarke-directed film. Viewers see a priest discussing a 15-year-old boy’s future with his devout parents, who nod reverently as the boy chews his nails and broods in silence. Then the film cuts abruptly to a flashback of the kid “being buggered by the same priest not two hours before.”

The next scene finds the boy in his room, dancing maniacally to “Sorry for Laughing,” a 1981 single by Scottish postpunk band Josef K. “As Paul Haig sings ‘When we groove on into town / Charles Atlas starts to frown,’ the boy’s dance punches turn into punch punches. He’s hitting the walls again and again, his knuckles becoming bloody. . . The scene ends as the record ends, the boy slumped on his bed, his abject body sobbing.

“This isn’t an Alan Clarke film.”

Caveney recalls his own evenings concluding more quietly, in a solitary bedtime routine of teeth-brushing, dissociation, and self-disgust. This memoir of abuse and its permanent aftermath pulls no punches in a way that a more aggressively dramatized portrayal of a punch-throwing protagonist simply couldn’t.

The Boy with the Perpetual Nervousness, though often gorgeously lyrical and improbably funny, is not so much a book about cathartic rage that bursts out as it is about anguish and loathing that corrode from within. “The rage and despair are all there,” Caveney writes, “but they are there like photocopies of themselves. Bad photocopies at that, ones that are smudged and that you’ve got to peer at for a long time before realizing that you’re staring at splodges of ink.”

Horrifying tales of altar-boy rape at the hands of predatory priests are sadly familiar in this post-Spotlight age, as are their predictable outcomes, in which the abused pay the steeper and more lasting price than the abusers. Part of what makes Caveney’s story so gripping is the perfect storm of circumstances that coalesced to set such an effective trap for his 15-year-old self.

Raised among working-class Catholics in Accrington, a dreary and obscure Lancashire milltown, Caveney comes of age in an atmosphere all but cut off from the vibrancy of London and the era-defining events of the late 1970s. The Boy with the Perpetual Nervousness thrums with a brilliantly evoked and obsessively detailed soundtrack featuring iconic punk and postpunk bands like Joy Division, the Buzzocks, the Sex Pistols, the Clash, Patti Smith, and the Pretenders.

Both Winterbottom and Caveney engage in mock-exaltation of a legendary 1976 Manchester Sex Pistols gig of which Caveney writes, “One day, technology will enable us to prove conclusively just who did attend this event, and that day will be a day of terrible reckoning.” For “intense and bookish” Accrington lads like Caveney, such contemporary cultural milestones felt hopelessly remote, “both ancient and crushingly modern.”

Amid geographical isolation and cultural privation, Caveney attends a Roman Catholic grammar school in which the “hip youngish gunslinger of a priest” is also headmaster, English teacher, and a figure of supreme authority to students and parents alike. The charismatic “Rev. Kev” appears the perfect antidote to Accrington’s dead-end parochialism, offering a refreshing affinity for Stevie Wonder and a willing ear for Caveney’s incipient “ambitions and dissatisfactions.” He offers an irresistible lifeline to a more expansive world of literature, theater, and art.

That the Rev. Kev effectively barters out-of-town gourmet dinners and theater tickets for forced sex after pivoting from priest-teacher-mentor to priest-teacher-mentor-abuser makes it harder for Caveney to refuse the man’s advances. This seeming generosity makes it all the more unlikely that Caveney might ever convince his parents or anyone else that the priest isn’t a heaven-sent benefactor he’s lucky to have in his life.

Eschewing fist-pounding agitprop and a soaring salvation arc, The Boy with the Perpetual Nervousness neither aspires to nor achieves a dramatic apogee as a tale of rebellion, self-destruction, addiction, or recovery—although all those things happen. The narrative goes where it goes, jumping about in time, digressing at will, at times at length. A caustic diatribe against the wink-nudge teacher-pupil pedophilia endorsed in so many rock songs stands out; Caveney reserves his sharpest scorn for the “arty pretensions” of the Police’s 1980 hit “Don’t Stand So Close to Me.”

Sometimes Caveney addresses the reader, sometimes his (present-day) therapist, sometimes his willfully clueless parents, sometimes Rev. Kev, often turning from one to another without warning. Caveney metes out his memoir in short, staccato bursts ranging from a few pages to a few paragraphs. He heads each segment with an all-caps “NEXT,” conveying the absence of structure in a life spent careening from one experience to the next on momentum from past trauma.

Three decades, a masterful memoir, and an incomplete exorcism later, Caveney’s next NEXT feels like an open question. His refusal to fabricate a world in which such questions neatly and inevitably resolve themselves gives The Boy with the Perpetual Nervousness an unsettling resonance that more triumphantly framed survivor stories rarely achieve.