The Boy: A Novel 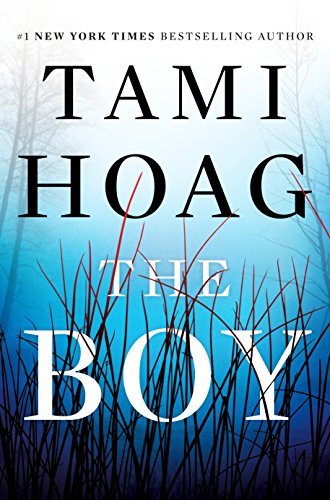 “The Boy is a story well told, and Nick Fourcade and Annie Broussard are an investigative team you’ll eagerly come back to for more.”

Without a doubt, Tami Hoag is a veteran of the bestseller industry. There are more than 40 million copies of her books in print in more than 30 languages, and each new title instantly rings the bell on the bestseller charts.

Her latest offering is The Boy, a police procedural set in fictitious Partout Parish, Louisiana. It features a husband-and-wife detective team, Detective Sergeant Nick Fourcade and Detective Annie Broussard of the parish Sheriff’s Office. This pair first appeared in A Thin Dark Line (1997).

Called out to a shack on the outskirts of Bayou Breaux, Nick Fourcade discovers a horrific crime scene. A seven-year-old boy has been brutally stabbed to death in his bed, while his mother, Genevieve Gauthier, managed to escape and run for help. At the hospital with Genevieve, Annie Broussard struggles to understand what happened. Although the mother has defensive wounds, it’s not clear why she survived and why someone would murder an innocent child in his bed.

Complicating the investigation is a new sheriff, Kelvin Dutrow, who has an enlarged ego and a powerful desire to fire Nick. Equally frustrating for Nick is a new crime scene investigation team completely lacking in forensic experience. The CSIs are headed by an incompetent crony of the new sheriff, whose hatred of Nick matches Dutrow’s in intensity.

When the mother’s questionable background comes to light the mystery deepens, and Nick must decide whether the connections between her and the newcomers in the sheriff’s office are coincidental or indicate something far more sinister.

The Boy is an excellent police procedural. Hoag follows several threads as the story unfolds, casting suspicion on a number of characters and tipping her hand only toward the end as Nick and Annie sort through the confusion and begin to put together a clear picture of where everyone fits in the puzzle.

The two detectives make for effective co-protagonists, and their up-and-down relationship keeps us interested while we’re following their progress through the mystery.

Some of the secondary characters are rather two-dimensional, though, and Hoag seems to have a problem finding a positive male character to write about. Nick is the closest we get, and he’s clearly a flawed hero. The rest are a mixed bag of adulterers, abusers, drug peddlers, office harassers, and general incompetents. Not exactly what you’d call a balanced cast on the male side of things.

At the same time, the author does an excellent job of creating a convincing atmosphere suggestive of rural Louisiana’s French Triangle. As she states in her Author’s Note at the beginning of the novel, this setting is one of her personal favorites. The reader clearly benefits from the time she spends developing a sense of the landscape and its people as she tells the story.

This local flavor includes Nick’s tendency to lapse into Cajun French when his emotions spike. Hoag includes a glossary at the back to assist readers not familiar with French expressions, which is a thoughtful touch. Amusingly, it mostly seems to focus on translations of Nick’s foul language.

Hoag is a good writer. As Nick contemplates a recent case he has not been able to close, the sexual assault of an autistic girl, he chafes on the knowledge that no one possesses a key to the world in which the victim lives:

“Nick understood that, as well or better than most. He had always fiercely guarded his internal life, even as a boy . . . When he was small, his mother had referred to him as petit homme de mystère—her little man of mystery. Very few people had ever been invited past even the first of his fortress walls.”

Hoag is also skilled with the smaller touches. An example of a very effective image is found when Nick surveils a suspect at night in a boat on the bayou across from the man’s house: “As shallow and delicate as a milkweed pod, the pirogue skated across the water, skimming over the duckweed and water hyacinth, deftly slipping between the cypress trees.”

Readers make up their own minds as to whether or not their favorite bestsellers have written themselves out and are just mailing in revenue generators, but in the case of Tami Hoag, The Boy is proof that this author continues to work hard at her craft.

You’re going to be staying up late at night as the pages turn with this one. The Boy is a story well told, and Nick Fourcade and Annie Broussard are an investigative team you’ll eagerly come back to for more.