The Boy and the Dog: A Novel 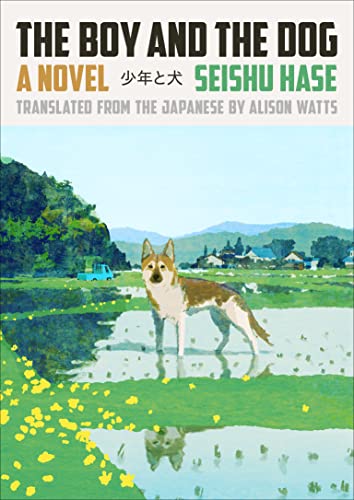 “This short but intense novel will surely win the hearts of dog lovers globally; and even people who don’t know dogs, or feel no affinity for them, may find themselves wanting a dog like Tamon to enter their lives.”

This small, simple book contains large, complex emotions and ideas. Set in Japan after the triple cataclysm the country experienced in 2011—earthquake, tsunami, and nuclear meltdown—it recounts the five-year journey of a dog who got separated from his owner during the disaster.

Along the way home, he takes up with a series of different humans, giving them love, companionship, protection, redemption, or hope before their life ends and he must move on again. Throughout, he never stops looking in the direction he must go.

The tale is not told through the dog’s viewpoint, however. Instead, it’s a sequence of six stories about the people who find the dog after a rough leg of his journey. He comes to them starving or injured, and each character—a man, a thief, a couple, a prostitute, an old hunter, and a boy—rescues him. The dog in turn rescues them from whatever hardship they are suffering.

Hardship is a theme for this story. Nobody is doing well in the world the dog passes through. Each character is somehow recovering, or trying to recover, from their world being turned upside down, or never having escaped a dark hole in the first place. Although the great disaster occurred in a limited area, its effects rippled outward to wound the Japanese economy and society. Readers learn a lot about that aftermath through the six stories.

Which is impressive, because the narrative is written in the “less is more” style. Each story is almost a vignette, with minimal information given for character backstory and motivation. The author’s meticulously chosen details say much with little. This doubles the impressiveness, because it’s translated material. Only readers fluently bilingual in Japanese and English will know if this English version holds truly to the Japanese version (which is a bestselling prize-winner in its native land). As it stands in English, chances are high the book will duplicate its Japanese acclaim as its audience expands around the world.

The tough part of reading the story is coping with its sadness. The jacket blurb claims it’s “a feel-good tale of survival, resilience, and love beyond measure.” Perhaps the characters end up feeling good thanks to the dog’s benevolence—often calling him a guardian angel—but some readers will only feel good if they enjoy poignancy and tragedy. Another phrase from the blurb calls the book “heartrending and heartwarming.” Heartwarming, yes, in the moments the guardian angel gives hope and comfort, but heartrending when his role parallels the angel of death.

Despite the book’s solemnity and pathos, it remains gentle. Also, nonjudgmental. The author is a skilled omniscient observer who simply presents us with the people, the places, the time, and the animal, and shows how they interact and, ultimately, meaningfully, connect. Readers can easily infer the rest.

The dog, whose name is Tamon but responds to whatever the characters call him, is never anthropomorphized. He acts like a loyal, intelligent, obedient canine no matter where he is and with whom. In many ways he is Dog Idealized, meanwhile staying realistic.

These qualities make The Boy and the Dog much more than the title suggests. This short but intense novel will surely win the hearts of dog lovers globally; and even people who don’t know dogs, or feel no affinity for them, may find themselves wanting a dog like Tamon to enter their lives.