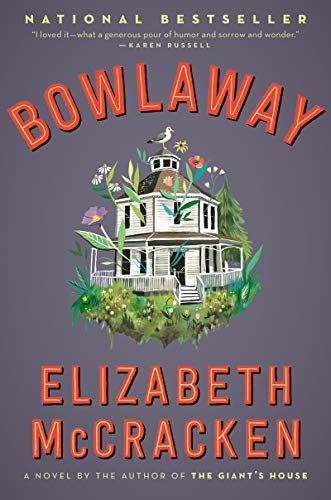 “There’s a lilting music to this writer’s sentences, a love of language throughout.”

The world of Elizabeth McCracken’s fiction is an engaging one. Her narratives come at the reader slantways, helter-skelter, and filled with eccentrics who deem themselves normal or normal people who think themselves strange. Coincidence is frequent and causality oblique. It’s as though Charles Dickens partnered with Anne Tyler to produce a story that’s half-melodrama, half-burlesque, and entirely original. In Bowlaway, to start with, the author declares, “Our subject is love,” and by tale’s close delivers on that promise. We are often far from shore yet never quite unmoored.

Such previous novels and short story collections as The Giant’s House and Thunderstruck and Other Stories find the surreal in the real. It is not always benign. McCracken’s heart-rending memoir, An Exact Replica of a Figment of My Imagination, focuses with fixed intensity on what can barely be borne. Lifeless babies figure also in her new novel and sixth book, but the “dying generations at their song”—to borrow a phrase from Yeats’s “Sailing to Byzantium”—sound the central melody here. As a male character announces, while “stuck in the trench coat of the tiny French professor, she of the at-the-ready clean underpants, the beautifully wrapped sandwiches . . .’ Lady, lady. All sorts of things happen in this world.’”

Bowlaway tracks several sets of proprietors—some willing, some unwilling—of a bowling alley built for candlesticks: a smaller and trickier variety of the modern ten-pin game. The player gets three balls, not two, per frame; the pins must be—or needed to be, at the time of this telling—hand-set. We learn much about the lore and history of bowling, much about its sorrows and acquired skills.

“On the pinbody’s ledge, you saw the whole chorus line of bowlers, intent, sizing up the pins, the lane, though it’s the seventh frame of their third string and the pins are the same, the lane is the same. They touch the ball to the underside of their chins, or they hold it on one hip, like a Greek statue. They bite their lips. They approach, and deliver, and the ball comes down the line, and the bowlers hope or despair.  And they do this not in unison but not out of it either.  Candlepin is hard; perfection is impossible; and yet some people are devoted to it.”

This is what’s often labeled a “multi-generational saga.” Taking place largely in the fictive town of Salford, north of Boston, the story covers roughly 60 years; Joe Wear is young at tale’s start and eighty at its end. He plays a major role at the book’s beginning, then drops from sight and (Spoiler alert!) returns obligingly in the final scene. In McCracken’s world such things do happen; what was lost or abandoned gets found.

First named “Truitt’s”—after its original impresario, Bertha Truitt, whom we meet lying alive in a graveyard—the alley hosts a series of dramatic encounters. These include the death by fire of her grieving husband, Doctor, Leviticus Sprague, and the murder by bowling ball of her drunken successor, Arch. Nahum Truitt, LuEtta Mood, Jeptha Arrison and Margaret Vanetten each have tales to tell.

There’s a “ghoster” and the “Salford Devil”—a shape-shifting menace who threatens the small town. As these several names suggest, there’s something more than a little “arch” about McCracken’s nomenclature; and her chapter titles are composed in the same vein. “The Oddity,” “Betrothed and Beholden,” and “The Unrelenting Baby” are only a few of the headings, and some of the action strains credulity. Death by drowning in a downpour of molasses, or by spontaneous combustion requires, of the reader, a willing suspension of disbelief. It’s a prerequisite, nearly, of the pleasure Bowlaway provides.

“Bertha Truitt told her visitors that the pharaohs bowled, of course they did, the pharaohs did everything first. Martin Luther bowled before he was devout; Henry VIII had lanes built at Whitehall Palace. Rip Van Winkle was watching his neighbors bowl at ninepins when he fell into his famous sleep.”

This sort of surface-skitter through history and fiction is one of McCracken’s trademark strategies. The First World War, the Great Depression, and incremental prosperity provide the backdrop here, and the changing feel of time and place is deftly handled throughout. The novel does have central figures, but it’s an ensemble piece, and each reader will no doubt have their local favorites.

The black poetry-writing doctor Leviticus Sprague, and his daughter with Bertha, the jazz singer Minna are improbable enough as characters to seem somehow authentic. (It’s fair to say the novel glosses over matters of race and sexual preference in a way that feels anachronistic; prejudice and moral probity find scant purchase in Salford, and though McCracken writes about the risks attached to women bowling freely in public she asks us to accept that an interracial marriage or homosexual alliance would have been risk-free.)

At times the language can grow strained. “‘I mean quite the opposite,’ said Bertha. “I mean the natural and exhausting teeming world.” Or, “Margaret looked at her son. He was pale and freckled and red-headed and looked like nobody she’d ever seen before in her life.” Would a character describe the world as “natural and exhausting teeming,” and would a mother think she’d never before seen her son? Like the names of characters, these perceptions can feel forced.

By and large, however we’re invited to relinquish the stern exigencies of realism and to go along for the ride. To insist on plausibility is to miss most of the fun. There’s a lilting music to this writer’s sentences, a love of language throughout. “We have all of us invented things that others have beat us to, walking upright, a certain sort of sandwich involving avocado and an onion roll, a minty sweet cocktail, ourselves, romantic love, human life.” Too, “Mysteries were full of promise, were a pleasure to contemplate. Facts were disappointing, and Roy had put all his stock in facts and had been, all his life, disappointed.”

The reader won’t be. There’s neatness to the plot’s loose ends and a wholly satisfying if unexpected conclusion. As McCracken declares, early on, “Bowling gave you something to think about besides your regrets.” There’s much to think about here.