Botticelli's Secret: The Lost Drawings and the Discovery of the Renaissance 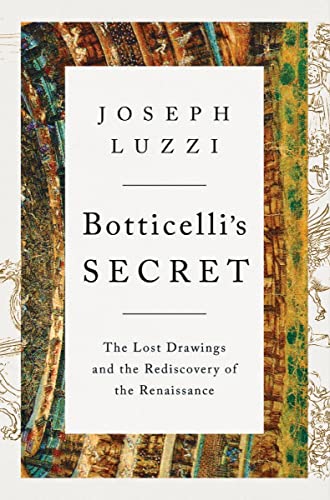 “Like a series of Russian nesting dolls, this book is about a specific painter within a specific culture within the history of how that culture has been seen and described through the centuries.”

There is really no secret in this book, but despite the misleading title, the book delivers a thorough presentation of Renaissance Florence and two men who are exemplars of the city: Dante and Botticelli. The theme connecting the many disparate parts of the book are the illustrations Botticelli made of Dante’s Divine Comedy.

Luzzi begins by introducing the term Renaissance, the history of its use, and what it has come to mean. It’s refreshing that he doesn’t trot out the tired comparison to the “Dark Ages,” but instead reminds the reader that “some of the elements now associated with the Renaissance already existed in the medieval period, many of whose thinkers were committed lovers of ancient Greco-Roman culture who devoted their lives to learning in flourishing intellectual centers like the recently founded universities at Bologna, Cambridge, Heidelberg, Oxford, and the Sorbonne.”

Dante himself, he reminds us, was a medieval figure, born in the mid-13th century and writing his magnum opus in the 14th.

This book packs in a lot—the life of Dante, including the exact language used to condemn him to death or exile; the life of Botticelli, a painter perhaps best known for his paintings in the Uffizi Museum, including the “Primavera” and “The Birth of Venus”; the rise and fall of the Medici family; the short reign of Savonarola; and the role Florence played as a cultural and commercial center during the Renaissance. It’s a lot for one slim book, yet it’s all here.

If you want to know the difference between a Ghibelline and a Guelph—and further, between a White Guelph and a Black Guelph—this is the book for you. If you want to understand how the Medicis managed to amass a banking fortune when lending money was forbidden to good Christians, the answer is here. If you’ve ever wondered what the Pazzi conspiracy was and who was behind it, that’s also in these pages. There’s even a short recap of the birth of art history and connoisseurship in the pages about Jacob Burkhardt, the scholar who invented the modern sense of the Renaissance and Italian art and culture. The notion of the Renaissance is brought up to the current day through the Pre-Raphaelites, John Ruskin, and Walter Pater. Like a series of Russian nesting dolls, this book is about a specific painter within a specific culture within the history of how that culture has been seen and described through the centuries.

Through it all runs the story of Botticelli’s illustrations, who commissioned them, how Dante’s work was regarded by Florentines a century or so later, how the drawings fit into Botticelli’s oeuvre as a whole and how they were judged by contemporaries. The saga continues after the painter’s death with the mysterious disappearance of the illustrations, now bound in a beautifully large book. The reason Luzzi introduces so much history of historiography is because Botticelli, once one of the favorite painters of the powerful Medici family, fell into disrepute just as the Medici did. It took a reassessment by later scholars to return his well-deserved fame to him:

“We can think of Botticelli as belonging to phase two in Vasari’s evolutionary schema of Italian art: he was part of a transitional group of artists whom Vasari considered better than their medieval predecessors, creating work that was ‘well designed and free from error.’ Yet in Vasari’s view, the work of Botticelli and his peers still lacked ‘any sense of liveliness’ and ‘harmonious blending of colors.’”

To Vasari, Michelangelo was the pinnacle of artistry, with Botticelli paling in comparison. Vasari himself, whose Lives of the Artists allowed him to pronounce judgement on fellow painters, was a better writer than artist. His pedestrian frescos inside the Duomo are a testament to that. But he’s a useful source for Luzzi, who also manages to track down written conversations between Botticelli and his older brother, among other amazing citations.

The research that has gone into this book is impressive and inspiring. Anyone who wants a short dramatic book about Renaissance Florence should reach for this title first. Luzzi has written so much more than the story of one artist’s fascinating commission. He’s created a vivid portrait of culture, politics, and daily life in the city that has become the very image of Renaissance history.