Born to Ride: A Story About Bicycle Face 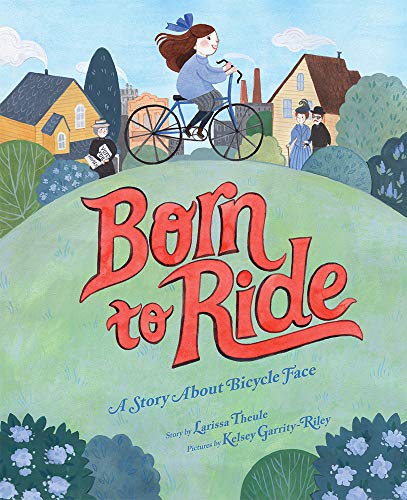 “Share this entertaining and informative picture book with young readers for discussion about women’s rights and the many ways women and girls were (are) held back and discouraged from doing the things boys and men could (can) do without question.”

Rochester, NY, 1896: Louisa Belinda Bellflower watches her brother ride his new bike, and she wants to ride it, too. Unfortunately, she lives at a time when women aren’t allowed to vote and women and girls are discouraged from all kinds of activities, among them wearing pants and riding bicycles.

But Louisa Belinda is ready to get rid of her cumbersome skirts for more practical pants. She puts on her brother’s and when she tells him that she would like to ride his bike, he warns her, “But what about—“ Joe lowered his voice, “bicycle face? It’s real, you know, everyone says so, even Dr. Brown.”

It sounds funny to us now, but bicycle face describes what was supposed to happen to women who rode bicycles. Their jaws would lock and their faces would take on a permanently strained expression.

Louisa Belinda, after considering her brother’s words for a while, decides she wants to try riding a bike anyway. Her brother shows her how it’s done, and, of course, she falls a few times. He asks if she is ready to quit, but Louisa Belinda wants to continue riding. And then, when she gets the hang of it, her face does change, but not the way her brother had warned. Instead, “With some alarm, she felt her eyes bulge, and her mouth widen—into a gigantic joyous smile.”

Finally, Louisa Belinda and her mother, who in the meantime watched her daughter ride and has sown herself some bloomers, both leave the house, each taking their bicycle. We turn the page and see them in a word-less double spread on their way to a demonstration for women’s suffrage while several other women walk and ride their bikes across town.

An extensive endnote gives further information about “bicycle face” and the fight for women’s suffrage.

Share this entertaining and informative picture book with kids for discussion about women’s rights and the many ways women and girls were (are) held back and discouraged from doing the things boys and men could (can) do without question.