The Borgias: Power and Fortune 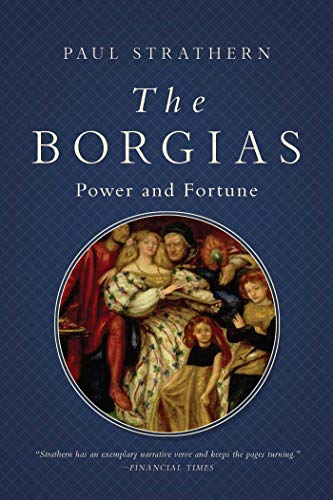 "No one needs a background in the Renaissance and its Holy Roman Church to enjoy this epic and fast- paced tale of debauchery, intrigue, politics, and more."

Some years have so many important events that they become significant in history. Aside from Columbus reaching America, in 1492 the Renaissance reached great heights, Lorenzo the Great of Florence died, Tomás de Torquemada became Grand Inquisitor, and Pope Innocent VIII breathed his last.

Corruption had become widespread and the Renaissance created an age of uncertainty that brought on violent civil unrest but without hope. Under these circumstances, the all-powerful, ruthless, and wealthy Cardinal Rodrigo Borgia finally became Pope Alexander VI, despite "his degenerate lifestyle." "The Spanish interloper was widely reviled."

Paul Strathern in The Borgias tells in parallel channels how "a trio such as Alexander VI, Cesare and Lucretia" Borgia "achieved infamy in their rise to the very brink of transforming western Christendom into their own family fiefdom." The new Pope had ambitions for himself and his children on the scale of Alexander the Great.

Pope Alexander imagined "a strong united Italy, under the power of Rome." Through his son Cesare, he foresaw the Church running a "great empire, stretching from Atlantic coast of the Borgias' native Spain to the shores of the Eastern Mediterranean and the Holy Land." Thus began "the Borgia Age."

Such ambitions came from the "self-conception of those members of the Borgia family" who believed they were the descendants of kings and were destined to become kings again." Their rise began with the highly educated and capable Alonso de Borja who by accident became the Pope Callixtus III.

The aged pontiff drew criticism for being the first Spanish Pope. He therefore had to fill his administration with his Spanish relatives and allies that he trusted. During his brief tenure, Church leadership made major strides in reform and in turning back the threat of invasions from the Ottoman Turks.

This much-hated Spaniard, however, also made his nephew and protégée Cardinal Rodrigo Borgia Vice Chancellor, "not only one of the most prestigious posts" but with "the prospect of great power and great riches." Appointment to that position "by no less than five popes over thirty-six years" made Rodrigo one of the most powerful men in Europe.

Cardinal Rodrigo Borgia finally maneuvered the College of Cardinals to make him Pope Alexander VI. He had illegitimate children and vast wealth but with regard to his "worldly pleasures," "little to suggest that he was exceptional in that sphere." "His behavior does not appear to have been as bad as many of his colleagues." Blame for the deaths of his three predecessors, for example, fell on their respective over indulgences and vices.

Pope Alexander sought to succeed through diplomacy and popularity. "The customary interregnum of mayhem in the streets," in this instance including 220 murders following the death of the Pope Innocent VIII, Alexander answered with the replacement of "all private armies and mercenaries" with an "armed City Watch." He also immediately replaced and reformed the judicial system.

The new pontiff established his power but not at cost to his Spanish family. Upon becoming Pope, he held "a series of public bullfights in the plaza in front of St. Peter's." He further won support from the people of Rome with extravagant ceremonies and pageants.

Alexander legitimized and placed into position by appointment or marriage his children, as well as other family members. Too often, however, these "duplicitous political ambitions" would "unravel under disastrous circumstances."

With the latter and diplomacy, the pope succeeded in keeping peace among the Italian city states, with the militarily powerful Muslim Ottoman Empire, and between Portugal and Spain after the discovery of America. With just the latter Treaty of Tordesillas, "he had incontestably left his mark upon the world."

Alexander succeeded despite a Vatican where "both military and political power had been so sorely lacking." "Many admired his skills, especially his attempts to strengthen the papacy." "Money could not only demonstrate power, it could buy it."

Strathern explains how the pope had to maintain a "duplicitous balance requiring all the diplomatic skills he had" to deal with threats such King Charles VIII of France and his overpowering army. "Indicative of his supreme diplomatic abilities," the pope formed an alliance that fought the invaders to a draw, that with disease, forced them from Italy.

For all of Alexander's success, "there was no doubting the fact that he had lasting enemies." "All knew better than to take him at his word." Cardinal Giovanni de' Medici, for example, "may well have despised the Borgias" "but he quickly learned to fear them." Pope Alexander, for example, welcomed Jewish refugees from Spain only much later to confiscate their property to finance his son Cesare's trip to France.

The ambitions, challenges, debauchery, failures, and successes of Alexander and his children in this Renaissance soap opera became a television mini-series recently. Here, however, the reader reads history in detail but for a popular audience, with a supporting cast that includes Ferdinand and Isabella, Leonardo da Vinci, Machiavelli, and Lorenzo the Magnificent.

No one needs a background in the Renaissance and its Holy Roman Church to enjoy this epic and fast-paced tale of debauchery, intrigue, politics, and more. The book includes useful maps of Italy and dramatis personae of the characters.