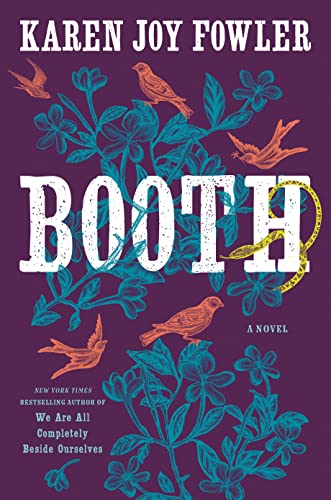 “A work of literary genius, showing how insidiously normal evil can be . . .  while delivering a gripping story with vivid characters.”

Karen Joy Fowler has done something fascinating in her historical novel, Booth. She draws the portrait of a tight-knit clan, a family whose father is a charismatic actor, “a famous father, a Shakespearean actor, on tour more often than at home.” The ten children form a deeply loyal tribe, the sons all following in their father’s footsteps to be actors themselves with varying degrees of success. The daughters, well, as daughters their choices are limited. But it is through the two daughters who survive into adulthood (four children will die) that the story is mostly told. And that’s the ingenious trick Fowler plays. The first half of the book is told through the eyes of the oldest daughter, Rosalie. The second half is from the youngest daughter’s viewpoint, Asia’s. Edwin Booth gets a short turn as well, but it’s the daughters who control the family saga.

Forced onto the sidelines, the daughters each have a central role nonetheless. They are the watchers, the keepers of the family’s secrets, the ones connecting the parts to the whole, like the rim of a wheel holding in the spokes. Ostensibly, with the title Booth, the reader is alerted that the character who will be the most important will be one of the younger sons, John Wilkes Booth.

We expect a story of how an assassin is born, how hatred is fostered and honed. But that’s not the story Fowler tells. Yes, she depicts a vivid family dynamic and each of the Booths are so well drawn, they leap off the page. But the story she tells is a much bigger one. With rich details yet a light touch, she shows how slavery, with its normalization of cruelty, undergirds the culture the Booths grow up in, even as their grandfather is a staunch abolitionist. That doesn’t keep them from leasing slaves from their owners and profiting off their labor.

“In principle Father disapproves of slavery, but not as strongly as Grandfather does. He was, on two occasions, a slave owner. He’d bought Joe Hall from Dr. Bond, asking Joe’s permission first, as if good manners could mitigate the evil of it. ‘Work hard for me for five years,’ Father had said, ‘and I’ll free you.’ And that’s what happened.”

Father’s second purchase is a woman, which means he would also own any of her children, though he promises that “none of her children would be sold anywhere outside the state of Maryland nor removed from Maryland after manumission.” Again, as if that makes something deeply immoral somehow okay.

Joe Hall, his wife and children, become “like family” to the Booths, but clearly they aren’t family and the ugly imbalance of power seeps through everything without being acknowledged. This kind of writing runs through the story, as much a part of the Booth’s experiences as acting, farming, raising children and grieving their deaths. Fowler manages to get at the seeping toxicity of slavery by weaving all these strands together seamlessly, just as were in the culture of the time. Given this, there’s no need to show any other motivation for John Wilkes Booth’s intense loyalty to the Confederacy. Although friends and a brother will help the north and the family as a whole is pro-Union, John Wilkes isn’t an outlier so much as the norm.

Each sister dotes devotedly on her brothers. Edwin Booth is the hero of the story, the one who gets much more page time than his younger brother John. But both are charismatic actors, competing to see who is the best. Edwin fights the urge to drink; John struggles with a quick temper and violent streak. Politics doesn’t seem important to either until suddenly it is.

Fowler inserts short chapters about Lincoln in the midst of the Booth saga, giving a sense of what’s to come and amping up the political tension as the country is torn apart. The shock of it, of friend fighting friend, is heightened this way. Things are ordinary until they aren’t. The focus through it all, though, is firmly on the Booth tribe:

“For most of Asia’s life so far, the large world of not-Booths has occupied very little of her thinking. Living among slaves, intertwined as they were with the Hall family, she seems strangely oblivious to the great issue of the nation. What does it have to do with her and her brother? Plus Father always said that actors can’t afford to be political. When he wrote his death threat to Jackson, that was a personal, not a political, matter. This changes.”

Fowler has done an incredible job researching not only the Booths but the culture they lived in, their daily assumptions of right and wrong, of how things should be. Then she turns everything on its head by having the two principal narrators be women, outsiders to it all in most ways. This is a work of literary genius, showing how insidiously normal evil can be, the true banality of evil, as Hannah Arendt called it. And she does it while delivering a gripping story with vivid characters. The book will resonate with readers long after they turn the last page.