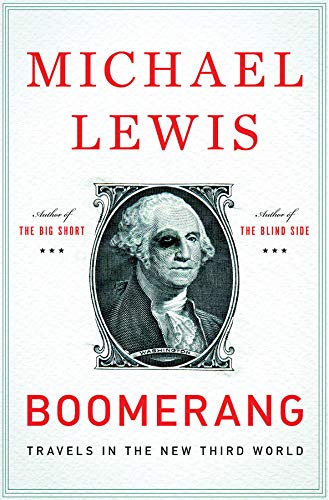 “The author of such works as Liar’s Poker and Moneyball, Mr. Lewis occupies the intersection of people, their presumptions, and the 800-pound gorilla they willfully ignore. He traffics in revelations, epiphanies that slap the reader upside the head . . . Mr. Lewis is a bit like Super Mario, hopping nimbly from one nation to the next just as it has financially imploded.”

If you mated James Thurber and H. L. Mencken (I know, it wouldn’t be a pretty sight) their result would be Michael Lewis, one of our sharpest observers of human folly.

The author of such works as Liar’s Poker and Moneyball, Mr. Lewis occupies the intersection of people, their presumptions, and the 800-pound gorilla they willfully ignore. He traffics in revelations, epiphanies that slap the reader upside the head in the vein of How could they have done that?—or—This is so ridiculous!—or—Are there no sane people alive in this world?

In Boomerang: Travels in the New Third World, we are treated to the wreckage human greed and financial fantasy hath wrought in Iceland, Greece, Ireland, Germany and everyone’s favorite backwater, California.

In his travels, Mr. Lewis is a bit like Super Mario, hopping nimbly from one nation to the next just as it has financially imploded. His m.o. is to provide us one, two or perhaps a whole cast of characters per locale who were predators, victims or simply dunces of The Great Credit Chimera (this reviewer’s attempt to use his considerable talent to replace a shopworn term like “the recession”).

Moreover, Mr. Lewis is no innocent abroad. He latches onto a small thing—something the average Joe might ignore—and squeezes it until the cry for mercy begins.

In Iceland, it’s the male population’s habit of pushing past each other on the street, the perfect metaphor for the nation’s newly minted bankers’ spending spree with funny money; in Greece, it’s everyone’s general distrust of one other, logical enough since every Greek cheats on taxes; Irish reticence translates into the government’s denial that any problem exists, despite the fact their banks have gone belly-up; for Germany, it’s all scatological (and not Mr. Lewis’s finest moment).

Yet at Boomerang’s heart is the warning of apocalypse: “The world is now pocked with cities that feel as if they are perched on top of bombs. The bombs have yet to explode, but the fuses have been lit . . . ,” Mr. Lewis writes, and you feel that tension behind the absurdities he mines.

After all, our troubles originated with the notion of free money, something for nothing, and endless growth. The playground was the real estate market. Then the bank hucksters moved in, creating the securitization and insurance schemes that were essentially casino bets. They found the suckers to play what were essentially rigged roulette wheels in which the house always won.

Who is left holding the bag after the rubble has bounced? You and I, dear reader.

Although Boomerang is a compilation of long pieces Mr. Lewis has done for such magazines as Vanity Fair, the book holds together in a way the world economy has not. Despite the vast acres of forests rendered into pulp for the 77,000 books written so far on the financial crisis, Boomerang is the flip side of western capitalism’s noble guides to prudent management. And Mr. Lewis is the Fool sitting before Peter Drucker’s Lear—reminding us that, despite their best intentions, sharp cookies look best with a pie in the face.