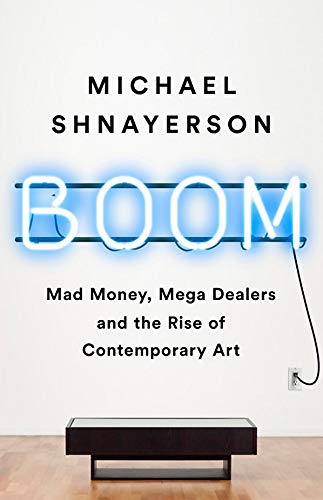 “Boom: Mad Money, Mega Dealers, and the Rise of Contemporary Art tells many wild and rowdy stories about legendary artists and their work, and the gallery owners that instigated their phenomenal celebrity.”

Almost everyone the world over has heard of superstar artists. Artists such as Andy Warhol, Gerhard Richter, Jeff Koons, Jasper Johns, Ed Ruscha, Jean-Michel Basquiat, Mark Rothko, or Jackson Pollock—the ones who took the art world by storm generating hundreds of millions of dollars of wealth. Together they launched a red-hot $62 billion-dollar global contemporary art market. Or did they?

Very few people the world over have ever heard the names Leo Castelli, Larry Gagosian, David Zwirner, Arne Glimcher, Iwan Wirth, Betty Parsons, Bill Acquavella, Sidney Janis, or Paula Cooper. These are the names of the powerhouse art dealers who could make or break an artist should they choose to do so. In fact, for every famous super artist there is a powerhouse dealer behind them. These were the names generating the multimillion-dollar transactions. And these were the names creating the buzz the contemporary art market needed to cross the thresholds of obscenely rich buyers.

In a nutshell, these dealers were all sales geniuses who saw a niche and ran with it. They hit the New York City scene just after WWII when the nation was looking for a new identity. A fresh face for art was brewing and the money was just starting to percolate up after being deferred for so long in economic depression and war efforts. Dealers themselves created a brand that became almost more desirable than any of the art they promoted. Wealthy collectors bought art from a gallery dealer because of the gallery’s reputation and not because of the art.

Boom: Mad Money, Mega Dealers, and the Rise of Contemporary Art traces the lineage of galleries, their booms, their busts, and the high rolling cutthroat risks in between, over the decades since WWII. From the New York School artists to the Abstract Expression period to Pop art, Minimalism, Conceptualism, New-Expressionism to whatever it is that you call a full-sized shark floating in a tank of formaldehyde, a gallery and it’s dealer has been there sniffing out a deal.

“This book tells the story of how a coterie of dealers made a global market for contemporary art.” Basically, the dealers, by sensing a certain special quality in an artist, took the time to get to know them and their work. Dealers then had “the clout to promote an artist over a period of years and orchestrate his or her success.”

With a financial savvy and very very deep pockets, dealers could corner the market on an artist by snatching up 80 percent of their production, then bid up their work at auction and instantly inflate the value of their collections. Art was a commodity and served as collateral for some eye-popping banking terms. Amazingly enough, what schemes would land a Wall Street blue-chip CEO in jail were perfectly legal in the privately traded blue-chip art market.

For such a haughty topic, Shnayerson has a surprisingly down-to-earth writing style. The number of names dropped in each chapter is dizzying, even for someone who is an art buff and fairly knowledgeable about American artists, but Shnayerson helps the reader keep pace with who’s who and what’s where. He patiently reminds us when we need reminding. At the same time he is assuming a certain level of intelligence in his readers and the book moves along at a pretty good clip despite its complexity.

It would have been nice if Shnayerson, or PublicAffairs, had gotten the rights to reproduce images of the artwork he discusses to give some context to all the hype, particularly when a painting set a record-breaking sale at auction. Paintings like Past Time by Kerry James Marshall which sold in 2018 at Sotheby’s for $21.1 million, the largest sum ever paid for a living African American artist. A reproduction insert would eliminate the internet search for this this prized gem.

Drama, intrigue, imaginative flair, betrayals, rich and famous shenanigans, this book has all the right ingredients for a fabulous reality TV show, even the best fiction writers couldn’t make this stuff up. There is so much conniving going on in the art world, even to this day, it makes sense that a painting could be so expensive when its story is alluring and priceless. Boom: Mad Money, Mega Dealers, and the Rise of Contemporary Art tells many wild and rowdy stories about legendary artists and their work, and the gallery owners that instigated their phenomenal celebrity.