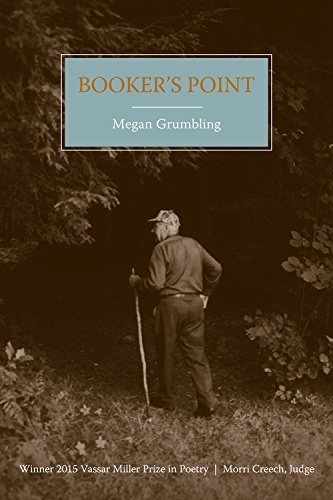 Megan Grumbling won the 2015 Vassar Miller Prize in Poetry for her book about Bernard A. Booker, the unofficial mayor of Ell Pond in rural Maine. Booker died in 2008, but the book resurrects him in poems that create a portrait of a self-reliant, resourceful old man of the woods. With an arresting combination of precise observation and rural language, Booker’s Point captures a way of life that is not so common anymore.

Just perusing the titles of the poems in the book, one gets a feeling for the man’s personality and interests: “Plucked,” “Stone Harvest,” “Making It Home,” “Birches,” “Rock Maple Sap,” “Trout Tenets,” “Practical Jokes,” “Hemlock,” “Blueberrying,” “Good Digging,” “Moosemeat,” “Tamaracks,” “Trouble,” “Beeches,” “Water Lines: Reckoning,” and “True North” are among the titles.

In poems that may seem at first to be straightforward narratives, there is beautiful use of sound. A careful but seemingly natural meter gives many of the poems a resonance that lasts beyond the first reading. The speech of a rural people flavors the poems, as is evident in the opening poem, “Some Kind of Hunter,” which begins this way:

He coaxed a pregnant woman right across

the river, and it weren’t no easy bridge.

A cousin of an in-law, broke as dirt,

she come up visiting from Vermont too poor

to buy a license. Booker paid it, set

a rifle in her hands, and took her up

to Perkinstown, the brook side, where they come

upon this bridge, just beams and cables, rough.

Full six months big, a borrowed gun; to her,

that span, it looked like one hell of a stunt

when Booker brought her up to it, said, Look,

you’ve gotta cross that river on them wires.

The poems in this book are neither obscure nor erudite; instead, they match the subject matter in their colloquial liveliness. A look at some of the verbs in the poem “Tacks,” which compares the narrator’s graceless sailing runs in Ell Pond with Booker’s expertise, shows the feistiness of the work. A glance at the verbs in this poem reveals: seized, lurched, luffed, blundered, stooged, heave, clenched, swooped and goose. These poems do not sit still.

Bernard Booker’s ingenuity and resourcefulness are made evident in poem after poem. In “Making It Home,” we learn the origin of many of the materials that make up his home: the granite slabs he dug up, and the stones he’s used in his fireplace, unearthed while he was working at putting in phone lines, each with its own story. And we learn of the nearby places that have given Booker such raw materials: Whippoorwill Swamp, Cabbage Hill near Shaker Cemetery, Canal Street, the old mill . . .

In “Stone Harvest” Booker gathers more stones from tumbled, nearly forgotten stone walls a neighbor has given him access to:

in slumber, quartzdream, humus, nodding off.

A ballast, gray and yawning in earth’s roll,

the granite rests, lulls a weight of this place.

The very rhythms of the poem make one want to slow down and look around, live more closely in alignment with the earth’s slow changes—something that seems so hard to do in this hurried, complicated, mostly manmade world of ours.

In cities and suburbs, plant life is sometimes seen as merely decorative; in Booker’s part of the world, it is essential. So there are poems here about growing a huge pumpkin, collecting wild blueberries, and especially, there are poems about trees. Booker was especially fond of birches, but he was intimately acquainted with many kinds of trees. The lovely poem “Beeches” begins this way:

Their silver holds a warmth to ever lure

initials of the youths, their pocket-knives

that hold the letters right, the symbols clear.

in copper. They will quiver in the snow

when all the other broadleaves have gone stark.

A tree for creatures, breath and gathering

the warmth, even in cold, its glow a lure

to carve ourselves an emblem, a return.

Megan Grumbling’s closely observed, lyrical poems give us a fine portrait of rural Maine and of one man whose life was so intertwined with the area around Ell Pond, it is hard to imagine how he could ever have lived anywhere else.