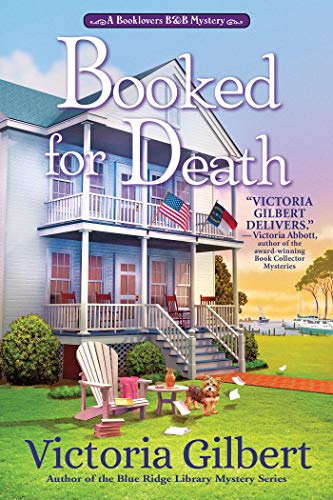 “Booked for Death is a solid addition to a popular cozy category . . .”

Genres and subgenres exist to help readers find the kinds of books they most like to read. This one, the first in A Booklover’s B&B Mystery series, can be dubbed a “village cozy” and should appeal to fans of that subgenre.

It contains all the favored tropes: a nice female main character thrust into a sticky situation; a charming setting (historic Beaufort on the North Carolina coast), about which we learn much; an off-stage murder whose victim is a contemptible person, so no nobody feels read bad about it beyond the principle of the thing; a slew of quirky characters with means, motive, and opportunity to do the dastardly deed; and friendly, accessible police force that can’t seem to uproot all the secrets needed to solve the crime, so the amateur sleuth feels compelled to investigate, even if it puts her in jeopardy.

She does have a personal reason to follow through. Charlotte Reed is a year into running Chapters, a literary-themed B&B, which she inherited from an aunt with a colorful and mysterious past. At 42, Charlotte is a widow, and many pages pass before we learn how she lost her husband (one of the more surprising facets of the story). Also surprising is what her aunt’s colorful, mysterious past proves to be.

Somewhere in that past she might have engaged in some skullduggery, which a vicious book dealer—the murder victim—threatens to expose. If his allegations prove true, they could trash Charlotte’s reputation and ruin her business.

While the official investigation goes on, all of Charlotte’s guests for that week, along with her staff, are stuck together in close quarters. They tough it out by attending the scheduled literary mystery programs at the B&B, all while suspecting each other of murder. This keeps the tension high.

At the same time, there are extra bits of enjoyment for readers familiar with the broader mystery genre, because they will recognize many of the titles and authors discussed. This element keeps the book in line with its series theme.

Meanwhile, Charlotte as a lead character is disappointing in how fast—like, instantly—she starts assigning possible motives to her staff and friends. Of course, with a knife from her own kitchen being the murder weapon, and a key to the building where the murder takes place coming from her own drawer, and darn near everyone having access to both, it’s not unreasonable to consider the killer is someone close to her.

That plus being a practiced hostess, smiling and pleasant despite whatever she’s feeling, makes her effective at being two-faced. The people who suspect her aren’t out of line in thinking she could have done it as well as anyone else.

The plethora of suspects makes the whodunit part of the story intellectually challenging. Some aspects leading up to the resolution, however, teeter at the edge of plausibility. Those moments make the story feel forced to fit conventions rather than arising naturally from character and situation.

There’s also an overzealous editor somewhere in the chain, so that the narrative spells out “bed-and-breakfast” every single time—including dialogue—whereas these days most folks routinely say “B and B” and understand what it means. That’s an odd and unimportant detail but it might cause some readers to stumble repeatedly and distract them out of the story.

Overall, Booked for Death is a solid addition to a popular cozy category and will give its fans a new series to follow.