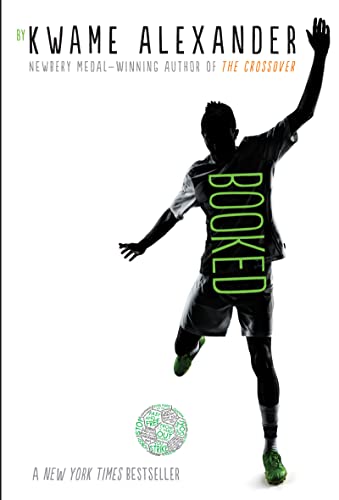 “engaging characters, relatable issues, and hip-hop flavored poetry will have readers scarfing up this latest offering like a banana split in summertime.”

Much like his Newbery Award-winning The Crossover, Kwame Alexander’s Booked is a novel-in-verse about a sports-crazy teen negotiating life on and off the field. And like his other books, it’s dramatic, engagingly written, frequently funny, and ideal for reluctant middle-school readers.

Eighth-grader Nick Hall loves soccer with a burning passion but declares that he hates words. This proves a challenging situation for a linguistics professor’s son who is forced to read his dad’s dictionary of Weird and Wonderful Words every day. Nick’s mother used to race and train horses, and longs to return to that work. From early on, it becomes clear that Nick’s parents are having marriage troubles.

At school, things aren’t going much smoother. Nick’s best friend Coby has turned into his soccer rival by virtue of landing a position on a competing traveling team. Stern English teacher Ms. Hardwick keeps trying to force Nick to care about books and writing. Twin bullies Dean and Don pick on him, eventually stealing his bike. And to top it off, Nick has a crush on lovely April, but is too daunted to make a move, as in this excruciating encounter outside their shared Social Dance & Etiquette class:

“Still, she smiles your way, and you do the same, till

you see your mom out front, in the car, waiting

That was a fun class, wasn’t it.

Sorry we didn’t get to dance tonight.

Do you want my numb—

the passenger window as you jump in.”

Nick and Coby’s teams are each invited to play in the prestigious Dr. Pepper Dallas Cup tournament, and the friends are over the moon about it. And then, the other shoe drops:

she’s decided to go back to work,

you’re not too surprised,

how much she misses

But when she says,

Nicky, your father and I

right in the center

all across your life.”

To make things worse, during a match against Coby’s team, Nick sprains his ankle and suffers a ruptured appendix at the same time. Amidst the rubble of his dreams and his bitter disappointment in missing the Dallas tournament, Nick slowly begins to change.

Alexander does a brilliant job of capturing teen-speak and teenage angst, while leavening the heavier plot turns with welcome humor. The engaging characters, relatable issues, and hip-hop flavored poetry will have readers scarfing up this latest offering like a banana split in summertime.