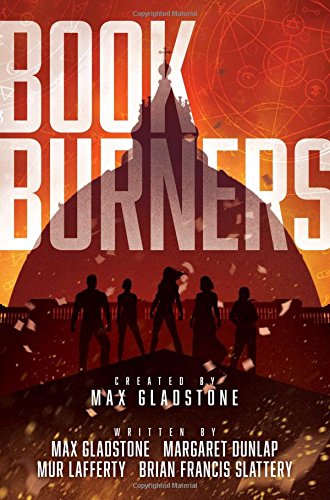 It is an ambitious project that could have crashed and, well, burned. Having four authors collaborate on one project can usually be a recipe for disaster, but under Max Gladstone's guidance, Bookburners is an incredible accomplishment in storytelling.

Originally released in serialized episodes in which each episode was written by one of the four authors, Bookburners collects all episodes into one 800-page novel. Despite the size, this book is a fast read and incredibly hard to put down. The different writer voices and styles mesh perfectly and provide variety so that the narrative feels fresh and alive with each new episode.

The book focuses a lot on Sal Brooks, a police detective, and her initiation into Team Three of the Societas Librorum Occultorum. The Society, as it is called, is dedicated to hunting down magic and the monsters released by people seeking to harness that magic for their own selfish and dangerous ends. Team Three's enemies call them the Bookburners, but they ignore the mocking name and focus on getting the job done. It just so happens that the job is to save the world from total demonic domination. Sal quickly finds out that her new position is far from a nine-to-five gig.

Similar to a season of a favorite TV series, the episodes are made up of contained adventures but with a larger story arc connecting them all. By the time the last few episodes are reached, the larger story arc takes over, and the reader is catapulted into a fast-paced, high-energy supernatural thriller. Again, this book is incredibly hard to put down, especially when getting close to the climax of the story.

To sum up: Get this book. The only negative found was that it had to eventually come to an end. That is saying something right there.