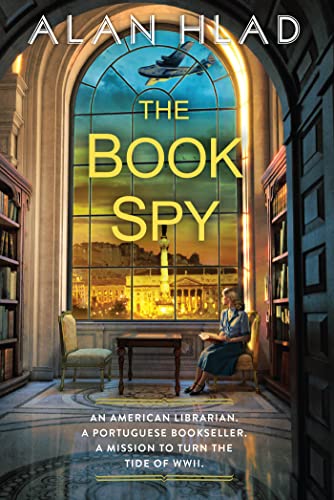 Alan Hlad has mined a fascinating bit of forgotten history into an engrossing war story. There really was such a thing as a group of librarians sent into neutral parts of Europe to gather information about Germany from newspapers and other records, capture it on microfiche, and get it back to the intelligence branch run by William Donovan, the OSS. Librarian spies? The contrast of images proves irresistible.

Hlad has clearly done his research and loosely bases his main spy, Maria, on one of these daring librarians. Maria’s journey becomes even more convoluted as she ends up acting like a double agent, pretending to spy for the Germans while actually feeding them fake information. A love story is added into the mix, weaving in the other plot line which features a man who makes fake documents to get Jewish refugees safely out of Portugal. There is intriguing information about Nazi gold laundering and the way it was used to purchase vital wolfram, a metal essential for steelmaking, from Portugal. All of these historical details provide a rich tapestry for the characters to move in.

The writing can sometimes stumble—there are several mentions of patriotism “surging”—but the narrative pulls the reader along. Maria gets her position by crashing a fancy party where Donovan is speaking, proving her daring and ingenuity. It’s a clever scenario, one that characterizes both Maria and Donovan well.

“Through the corners of Maria’s eyes, she watched the guards, their hands clasped and peering in her direction. Her excitement evaporated. Damn it—they know. She expected the guards to call her aside, but they silently remained at their post. They’re keeping an eye on me until Donovan’s finished speaking, then they’ll remove me or have me arrested. Her mind raced, determined to find a way to reach Donovan before they reached her.”

Donovan, of course, rewards such intrepid actions by hiring her on the spot for his new unit. And the escapade proves to be only the first and most mild of the many dangerous situations awaiting Maria. Her nerve never falters, however, all the way to D-Day and the final days of the war. The reader is eager to follow her, every step of the way.