The Book of Separation 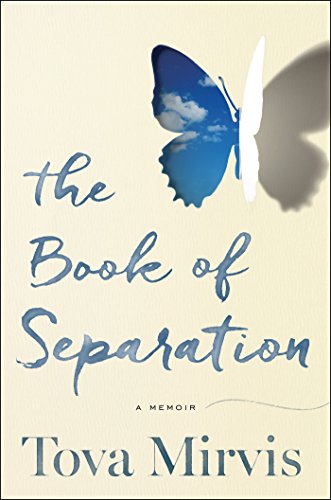 “In all my years of fantasizing about leaving, I hadn’t understood that you could go yet remain stuck inside. It wasn’t the actions that held you tightest but the imprint they made in your mind.”

Author Tova Mirvis, as exhibited in her quote above, ruefully describes her years of feeling trapped in a world that had long filled her with misery. The Book of Separation is exquisitely written, masterfully spoken from the heart.

It is a journey that both educates and challenges the reader. In the case of Mirvis’ life, she adroitly navigates us through personal tributaries that comprise each geometric pattern, which ultimately forms one cohesive unit.

Though the tunnels are excruciating at times, her eventual arrival at the mountaintop culminates in both freedom and fulfillment. She is often torn between two lives. She clearly conveys the deep satisfaction and joy of having a close family while simultaneously delineating the heartbreaking realities of living a life that only rewards conformity. If anyone questions the rules and the ancillary laws there is a great price to pay as they were” enforced not by a belief in God but by communal eyes that were just as all-seeing and all-knowing.”

She has long felt enslaved to the stringent maxims of Orthodox Judaism. But for years even the contemplation of leaving leaves her paralyzed. The risks involve the potential of losing the totality of her tight knit community as well as her entire family. She is acutely aware of the ostracism and total shunning she will have to endure if she takes that forbidden step.

Jewish law is a complex subset of ancient tenets of the Jewish religion. Strict adherence to these tenets define the basic fundamentals of proscribed behavior for all involved. Both behavior and speech are choreographed in movements, words and gestures that configure each members place for the perfectly dramatic tableau originally enacted centuries ago. Members are told that all edicts supersede any individual thought. Even parents are taught that “You are harming your children if you say what you really believe.”

Some of the rules that are indoctrinated into the psyches of children from a very young age might stun a reader not familiar with the customs of this sect of Judaism. One ancient ritual that is foreign to most people is called the mikvah, which is a cleansing bath only for women who must be purified after her period in order to have sex again with her husband. “The mikvah lady” inspects the woman to assure her purity.

In one fairly stunning scenario after deciding she wants to get pregnant, in order to ensure it is the proper time, she is instructed to visit the rabbi to have him examine her blood smeared cloths. The two of them step outside in the alley in order for him to diagnose her readiness to return to the marital bed.

After years of torment and indecision, Tova reaches the breaking point. Her state of cognitive dissonance has completely dissipated and she is ready to be free of both her husband and the only life she has known. But she is not totally prepared for the feelings that arise about explaining it to her parents, husband, and children. However difficult it is, she knows she has chosen the right path for her.

One of her proudest moments is right after her fortieth birthday when she takes the final step toward a divorce. In a conference room, she remains silent and waits patiently for the group of assembled rabbis to sign her “get” (which means divorce document in Hebrew). This simple piece of parchment paper is the first step into another world where she could become her own woman with her own ideas and the freedom to be herself for the first time.

The Book of Separation is a fascinating memoir that can be appreciated by myriad of readers. At first glance it may appear to be solely a woman’s story but being anxious about lifestyle changes, ending a relationship or living according to certain rules whether self-imposed or from others is part and parcel of the human condition. The added bonus is the education by the author about a religious world many are not familiar with but can learn a great deal about.