The Book of Killowen (Nora Gavin) 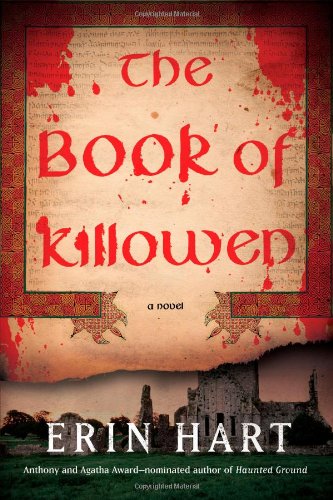 “Ms. Hart conceives a fascinating situation and lays out its complexities in careful, graceful prose.”

Past and present come together in a peat bog in this dark Irish mystery—number four in Ms. Hart’s series featuring Irish archeologist Cormac Maguire and American pathologist Nora Gavin.

In The Book of Killowen the couple has advanced in their relationship to cohabitation—with all the family burdens that brings—that travel with Cormac and Nora to their current job: extracting, preserving, and analyzing a ninth-century body preserved in the bog, but found underneath a much fresher corpse discovered inside the trunk of a buried Mercedes.

Readers unfamiliar with the previous books may be slow to recognize they’re into a series, because the lead characters take several chapters to come on stage as the author builds the scenario. Cormac and Nora soon get upstaged by secondary characters, such as Detective Stella Cusack, who carries much of the story’s weight.

But even she gets nudged out of the spotlight by the parade of other characters, each of whom has a secret, which makes Stella’s investigation as muddy as . . . well, a peat bog.

Cormac and Nora get the key scenes and discoveries in the story sometimes through their own investigations and insights but often through serendipity. Both excel at being in the right place at the right time to witness or overhear critical tidbits. Good thing they’re conscientious about reporting them, else the crime(s) might never get solved.

The Book of Killowen, like many mysteries rich in history or the arcana of special professions, changes character point-of-view with darn near every chapter. The head-hopping allows information to be constantly supplied while taking a long time to weave everything together. Suspects range from a fugitive political rebel to a scribe of ancient manuscripts, with damsels in distress, French cheesemakers, artists, and dirty cops in between.

With so many characters and motives to choose from, the murderer may come as a surprise. Also surprising is how many of the characters from such diverse backgrounds link to each other in ways that implicate them in one or both crimes.

Everyone, it seems, is seeking the Book of Killowen. This ancient manuscript was written by a radical monk—perchance the one found in the bog?—whose ideas were considered heretical and whose writings now represent immeasurable wealth to both treasure hunters and scholars.

Ms. Hart conceives a fascinating situation and lays out its complexities in careful, graceful prose. Her craftsmanship, however, often feels too studied. The pacing of the suspense and the end-of-chapter cliffhangers echo with “how to write a successful novel” technique. Those lessons could have been better applied to dialogue, which makes several characters sound alike through both their language and the shortage of action or emotion that accompanies their speech.

The academic underpinnings—archeology, Irish lore, medieval history, forensics—are well researched and credible, covering a lot of territory. The author appends a historical note to explain when and where fact and fiction diverge.

The overall effect is a story that grabs the intellect more than the heart. Yet Cormac and Nora are likable characters, and their adventures and environments so interesting that readers will want to see what they get up to next.