The Book of Hope: A Survival Guide for Trying Times (Global Icon Series) 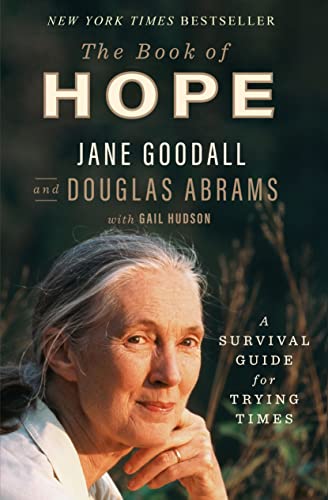 “In her quiet, humble way, Goodall and her co-author have masterminded a full-bore assault on the cynicism, emotional exhaustion, and despair of living in a world in the throes of climate change, a global pandemic, and other disasters.”

The Book of Hope: A Survival Guide for Trying Times is written as a quiet conversation between old friends. But the conversation is between Jane Goodall, the legendary naturalist whose decades-long study of chimpanzees upended our understanding of what it means to be human, and co-author Douglas Abrams, who’s seeking to preserve and present her hard-earned wisdom for future generations. And the topic is hope, which Goodall says, “is a human survival trait, and without it we perish.”

But hope is not a feeling as much as the beliefs and actions we must embrace to protect, restore, and sustain life in the face of climate change and other human-caused disasters. Co-author Abrams gives a succinct overview of the practice and science of hope.

Unlike faith or wishful thinking, hope is an active engagement that generates a vision of a desired future while nonetheless seeing inevitable obstacles. The scientific study of hope, in turn, has found four essential components: realistic goals, realistic pathways to reach those goals, confidence, and support from others. Or, as Abrams puts it, “Hope is how we create new facts.”

Goodall gives her reasons for hope: humanity’s “amazing intellect,” nature’s capacity for repair and resilience, the power and enthusiasm of young people, and human nature’s indomitable spirit. The Book of Hope explores each reason in turn, often against Goodall’s experiences of growing up in England during World War II and later learning of the Holocaust, as well as being at her chimpanzee research site in Gombe while genocide was occurring in Burundi and Rwanda, and being in New York City during the September 11 terror attacks.

Goodall needed to be equally clear-eyed and open-hearted after learning of chimpanzees imprisoned in labs for unnecessary medical and scientific research, as well as seeing the near extinction of wild chimps from deforestation and the bushmeat trade, both caused by human poverty. Realizing that saving our primate kin meant helping people, the Jane Goodall Institute founded Tacare, which worked with local Tanzanians to create community-level health care, education, sanitation, and food sources, slowly leading to tree planting and other conservation partnerships. Now in six African nations, the Tacare model helps local people protect their forests for their future, and for chimpanzees and wildlife.

This story, like so many others, makes The Book of Hope challenging. In her quiet, humble way, Goodall and her co-author have masterminded a full-bore assault on the cynicism, emotional exhaustion, and despair of living in a world in the throes of climate change, a global pandemic, and other disasters. It’s hard to read The Book of Hope without tears of joy, relief, and hope.

Goodall is clear: “I believe we still have a window of time during which we can start healing the harm we inflicted on the planet—but that window is closing.” The Book of Hope opens that window a tad wider with stories of people from around the world whose hope has created effective actions that save habitats, wildlife, and humans.

The Book of Hope is a letter (hopefully not the last) from a woman whose remarkable life proves “with courage and determination, the impossible becomes possible.”

Adrienne Ross Scanlan is the author of Turning Homeward: Restoring Hope and Nature in the Urban Wild. Her essays and creative nonfiction has appeared in anthologies such as American Nature Writing. From 2012 to 2017 she was nonfiction editor of The Blue Lyra Review: A Literary Magazine of Diverse Voices.