The Book of Goose: A Novel 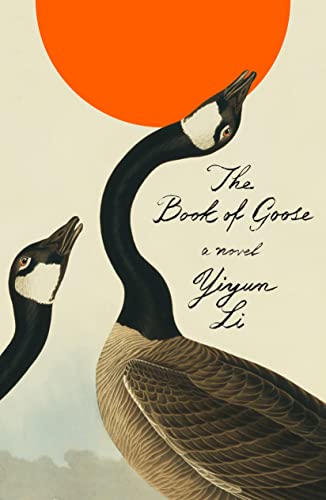 The narrator of Yiyun Li’s newest book is Agnes, but she insists the story she tells isn’t really about her, but about her best friend Fabienne:

“The name you should pay attention to in this story is Fabienne. Fabienne is not an orange or a knife or a singer of lullabies, but she can make herself into any one of those things. Well, she once could. She is dead now.”

Fabienne and Agnes grow up in rural southern France, taking care of pigs, cows, goats, and chickens. Their world looks small and limited to people from Paris, but to them it is everything. Agnes writes about the intense bond between the two girls, one the leader—Fabienne, one the follower—Agnes. Where Fabienne is sharp or cruel to Agnes, Agnes feels no pain, just a deep desire to please this mercurial presence. Agnes doesn’t feel manipulated or used. Instead she feels that Fabienne completes her, makes her whole. And she is confident that she fulfills that role for Fabienne, completing her. After all, Agnes would say, a knife needs an orange to cut.

The subject of intense childhood friendships, ones that are almost like marriages, isn’t one usually shown in novels. Li does an incandescent job of making this relationship vividly real, giving it the weight and impact it deserves. Along with the relationship between the two girls, Agnes describes a “game” Fabienne devises, one that takes on a life of its own: writing a book. It’s never clear why this is the game Fabienne chooses, but nothing is really clear-cut about her since we only see her through Agnes’ devoted eyes:

“Some people are born with a special kind of crystal instead of a heart. No, I am not talking about witchcraft, but it is a mystery that these people, who look no different than others, can sail through life without illness, injuries, and broken hearts. There are not many of them around, but Fabienne is one. . . . That crystal in place of a heart—it makes things happen. To others.”

Fabienne turns Agnes into a writer through their game, one who gets published as a child prodigy. Agnes considers herself a mere scribe, writing down the stories as Fabienne tells them, but Fabienne insists on Agnes’ name going on the cover. And it’s Fabienne who charms the widowed postmaster into helping them with their book.

The postmaster does more than smooth over their writing: He sends the finished book to an editor who eagerly publishes it to much acclaim. And Agnes’ life is forever changed. She’s no longer a country bumpkin, taking care of animals. She’s a brilliant author, brought first to Paris for interview after interview, then to England to a private girl’s school where her parents agree that the headmistress should control Agnes’ education and her budding career.

This could have been a book about the power of storytelling as Agnes discovers her own voice and tries writing a book without Fabienne. It could have been a story about how the educated elites romanticize the rural poor, as the press does when it gushes about Agnes. It could have been a book about changing one’s destiny, as both Agnes and Fabienne seem fated to live hard, cruel lives, stalked by an early death, as happens to most people in their village. Fabienne’s older sister dies before the book starts while Agnes’ older brother dies half-way through. It is clear the young are not expected to live long.

Somehow Agnes cheats this fate once she’s discovered as an author, but that doesn’t seem to be what really matters in the book, either. The focus remains squarely on Fabienne’s power over Agnes, even across an ocean, how Agnes continues to define herself and orient herself in relation to her powerful friend. And the book we are reading, the one Agnes is writing, is ultimately a book of longing for an absent friend, one who still remains present deep within Agnes.

The title itself is an homage to Fabienne, since at home in France Agnes took care of chickens while as an adult living in the United States with her American husband, she takes care of geese. She’s traveled as far as one could imagine from her French home and yet remained essentially the same. She’s simply the one who tends the birds, waiting for Fabienne to give meaning to her life.