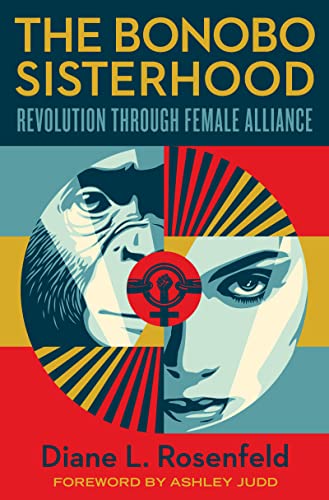 In her often witty and trenchant publication calling for revolution through female alliance, legal expert Diane L. Rosenfield claims that “The promise of the bonobos with whom we share 98.7 percent of our DNA is to end male sexual violence . . . we (women) may learn from our closest living relatives, the bonobos, to form sustainable female-to-female alliances that not only disrupt individual acts of male aggression, but render obsolete oppressive patriarchal systems.”

Idealizing the bonobo is not a new game despite the suggestion here in the Foreword that this publication will provide an introduction to their joyous ways, notoriously involving frequent and always consensual copulation, and exemplary female solidarity, even when some random bonobo male is not yet on message.

“In the rare instances where a male does aggress the reaction from the nearby females is extraordinary: they stunningly rush together, shriek and bellow, gesture and posture intimidatingly, flinging their arms about and jumping wildly, while all other males scatter hither and yon.” An example to us all. Rosenfield concludes that bonobos are living proof that patriarchy is not inevitable, and “evolutionarily have eliminated male sexual coercion.”

She poses the question as to why we humans cannot be the same as our allegedly closest relations, claiming that “We can choose to be bonobo. We choose love over fear; abundance over scarcity; peace over war; sexual choice and freedom over coercion.” Of course, the second and third of those options are not always available, nor are bonobo burdened with religion, philosophy, culture, or concerns about class and ethnicity as far as we know.

This raises another important question from the reader’s perspective, namely, does Rosenfeld’s analysis place too much weight on the shared DNA between the bonobo and ourselves? Are there not significant differences between us which would cast more light on our respective behaviours sexual and otherwise?

The Bonobo Sisterhood is divided into three logical parts: The Problem, which provides an extensive review of values and practices around human male anger, male entitlement and patriarchal violence; The Pivot, which is the moment when women learn that they themselves are worth defending, and learn how to do that (this includes disregarding the human male code of not hitting below the belt); and The Promise, which deals with building the Bonobo Sisterhood through a Declaration, A Constitution, Action Plans, Legislation and so forth which would provide the framework for, in her view, the most important form of equality, namely equality among women. Men are also said to be included though attention to this element of the argument is quite perfunctory. Rosenfeld admits that there have been previous attempts at building female solidarity particularly with respect to gender-based violence (Take Back the Night, #MeToo, etc.) and also highlights the conflicts and misunderstandings between different branches of feminist thought, in particularly the “sex-positive” versus the “anti-porn.”

Rosenfield is a lawyer, and this is reflected in the first part of the book, which is the most impressive and convincing of the three sections. Here she demonstrates very effectively in her analysis of violence against women that the law and its application is not impartial, and traditionally tends to confirm the status quo rather than leading change. These chapters show that a woman’s vulnerability to her husband or partner is built into the laws, which have been written by and for men, and are still in most societies administered by an overwhelmingly male judiciary.

Rosenfeld also interestingly analyses how women’s vulnerability is built into the vocabulary we use, showing that phrases like “violence against women,” “battered women syndrome,” etc. convey acceptance and passivity, rather than identifying the perpetrators and (unlike a bonobo) calling out an unacceptable problem.

While she demonstrates that among us humans, unlike among the bonobo, “No” does not necessarily mean “No,” she neglects the structural features underpinning human inequality and violence, which have shaped our admittedly inadequate legal systems, features, unlike most of our DNA, bonobos do not appear to share.

It's worth reminding ourselves there has been relatively little research on the bonobos . . . often designated as “hippies” or the “politically correct primates” . . . in their natural habitat, rather than in captivity. An article in the New Yorker entitled “Swingers: Bonobos are celebrated as peace-loving, matriarchal, and sexually liberated. Are they?” (Ian Parker, The New Yorker, July 30,2007) notes that “The pop image of the bonobo . . . equal parts dolphin, Dalai Lama, and Warren Beatty . . . has flourished largely in the absence of the bonobo itself . . . which was recognized as a species less than a century ago.”

Scientists, while seeming to agree on the bonobo’s joyous sex life and female friendships— compared not only with us but with other primates—appear to have paid less attention to any factors that would permit or promote such behavior. Wild bonobos keep themselves to themselves high up in the treetops in inaccessible rain forests in the Democratic Republic of Congo. They do not appear to suffer from any scarcity of natural resources, pressure on space, or a plethora of external enemies, which certainly affect how other primate societies structure their interactions.

By the same token—and this is not to deny or excuse the reality of patriarchal violence Rosenfeld focuses on . . . it has to be said that whilst she provides an excellent analysis of the ways that protections for male violence are built into the American legal system . . . the publication scarcely references the other factors which structure gender inequality, keep women divided among themselves, and are part of the package of problems that are expressed through sexual violence.

Some of these problems are limited economic and natural resources and consequent unequal distribution; and political tensions in and between human societies (bonobos do not toil, neither do they spin or trade); the time-bound fertility of (female?) humans and the long dependency of the human infant; and many other constraints that are always open to technological modification as we evolve!

Until further notice from primatologists and other scientists (who can still debate whether bonobos are actually nicer than chimps, or just more stylish), we can assume that, DNA aside, the bonobos live simpler, happier and much shorter lives than we do. There are many aspects of this we may speculate about, admire, and hope to adopt (e.g. female self-worth and female solidarity) but this is quite a stretch from “becoming bonobo.” While Rosenfeld’s analysis of laws and their (mis)application with respect to “violence against women” is truly outstanding, reaching out to the bonobos to solve those ills seems a treetop too far.