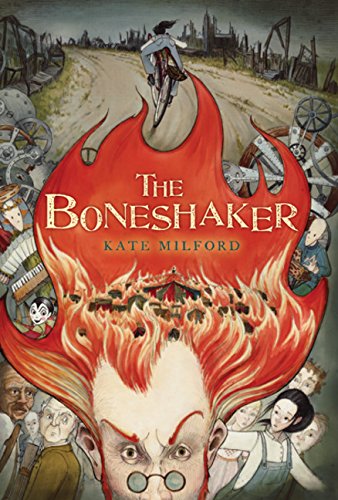 The first thing one notices about The Boneshaker is its eye-catching cover art. It’s vibrant, intricate, and unusual. It immediately draws in the reader. As the story unfolds, readers will be pulled back to that cover more than once as they try to locate the figures they read about. This is a tale of unusual elements. It mixes steampunk and magical realism. For those that are not familiar with steampunk, it is a subgenre of science fiction and speculative fiction. The Boneshaker, and stories that utilize such historical fantasy are set in the Victorian era and incorporate technology that is not common to that time in history. Set in 1913 Missouri, the story features thirteen-year-old Natalie who loves machines and all things mechanical. She and her father bond as she helps him in his bicycle shop. They repair bikes and motorcars and work on all manner of mechanical devices. He restores a vintage bike for Natalie—a boneshaker, so-called because a ride on such a contraption will literally shake the rider right down to the bone. It becomes a matter of pride for Natalie to ride this bike, a feat she is unable to do and loath for anyone to discover. A particular fascination for Natalie is automata, a self-operating machine that utilizes clockwork technology to propel itself. When Doctor Limberleg and his Nostrum Fair and Technological Medicine show come to Natalie’s town of Arcane, Missouri, it should mesh perfectly with her fondness for the unique and unusual, but as she and her friends begin their tour of the fair, intuition tells Natalie that all is not as it would appear. A feeling of unease and apprehension infuses her. Natalie includes her friends on an in-depth investigation to get a closer look at the hidden machines, medicines, and bizarre characters that run the fair.  Matters escalate and become more complex. Natalie begins to have disturbing visions, Doctor Limberleg displays a strange ability to make machines operate without a visible means of power, and her ill mother is taken to the fair despite Natalie’s protest to obtain a cure that may prove to be more harm than help. Natalie’s ability to ride that boneshaker is going to prove crucial to saving herself, her family, and the entire town from an evil force that is determined to win. Elaborate machinery plays a significant role in this story. Despite the author’s rather detailed descriptions of these creations, this reader found it difficult to fully visualize them. The Boneshaker is a rare novel in today’s literary world outside of children’s picture books that utilizes illustrations. It would have been most helpful for the illustrations to depict these machines more extensively. It seems a perfect opportunity was forfeited. Despite this minor disconnect, the book is clearly not diminished in its imaginative force. This is the author’s first novel. Kate Milford successfully takes a story that is richly layered in historical and fantastical elements and weaves a coherent and suspenseful tale. The supernatural aspects are interwoven in a seamless manner that is subtle but increasingly more creepy and unnerving as the story progresses. Readers are pulled into a tale they will be reluctant to let go of until every last question is answered. Reviewer June Goodwin, LCSW, is a clinician and educator currently counseling children classified as emotionally disturbed. She is a member of The Society of Children’s Book Writers and Illustrators.