The Bone Bridge: A Brother’s Story 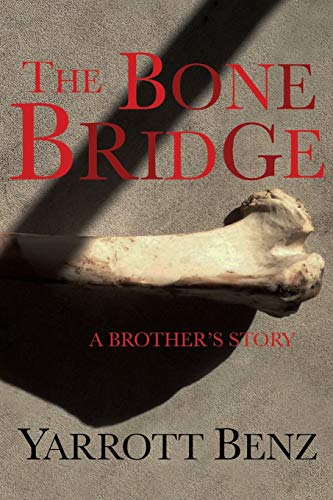 “a tremendous achievement. A work of truth. . . . The Bone Bridge is a book of brutal memories. It is hard to read, but impossible not to.”

The thing about a really good memoir is that it is rather like an old Looney Tunes cartoon, the one in which a Daffy Duck walks onstage into the spotlight and announces “I will now perform an act that no other performer has ever dared to execute.”

He sets a suitcase on the stage, opens it, and takes from it gasoline, nitro, and other combustibles—and drinks them all. Then, after instructing the audience, “Girls, you’d better hold onto your boyfriends,” he lights a match and swallows it.

There is an explosion.

When the smoke clears, Daffy is gone.

Emcee Bugs Bunny applauds from the side of the stage. “They loved it,” he cries. “They want more.”

The translucent spirit of Daffy Duck, still in his devil costume, rises from the stage. “I know, I know,” he says, his shoulders shrugging, “but I can only do it once.”

Because excellent, potent memoirs can only be written in such a way that nothing is left on the table, in a manner in which the author, in telling his or her life story, holds nothing back and shares what truths have been essential in his or her life.

Thus, the memoirist who has done what is expected of him and held nothing back can only hope that his story connects with an audience. As writing is an act and art form of communication, the memoirist who fails to find an army of readers is rather like a vague elderly person, who sits in front of the mirror, fiddling with hair and whispering, “I was lovely once . . .”

Novels come and novels go. If one fails, the author need only write another. Ditto biographies—if the Spencer Tracy book fails to connect, write about Katharine Hepburn, you’ve done most of the work already. Same with self-helpers, recipe books, and political thrillers.

But a memoir, a deeply felt, all-encompassing memoir? That’s a trick that you can only do once.

Case in point is The Bone Bridge: A Brother’s Story by Yarrott Benz, a book that deserves a large and appreciative audience for the simple reason that it is the best memoir written in recent years, one that hits the reader like a punch to the gut and leaves him, in turns, devastated, inspired, traumatized, and enlightened by Benz’s brother Charley’s story and his own.

Yarrott and Charley, brothers as different as different can be in terms of temperament, physicality, and sexuality, are, through some strange genetic quirk, the ultimate in blood brothers. When Charley—an athletic, rather lunk-headed teen—is diagnosed with a rather virulent case of aplastic anemia (a leukemia-like blood disease in which his bone marrow stops producing platelets), for which the only treatment is his brother Yarrott’s blood, or, rather, the platelets in his blood, the two brothers, seeming natural opponents since the younger brother’s birth, are locked together, both by the disease and its treatment.

Twice a week, each must go into the hospital and submit themselves to a tortuous round of treatment in which large quantities of Yarrott’s blood are removed, placed in a centrifuge in order to separate out the platelets, and then returned to his body in order to maintain his health. The platelets are then pumped into Charley’s arm in order to build a dam of platelets that keeps the boy from bleeding out through his nose and gums.

As Yarrott Benz writes about that first treatment:

“My head was spinning. The procedure sounded so complicated and so long. How will I get through this? How will I not faint? How can I not look like a scared pussy? I thought of the toboggan races on television the winter before. I thought of skiing at the lake. The object was to grab the bar in front of you and not fall off. I will hold on. I will hold on.

“I laid down on the gurney and put my hand through the grip on the arm brace.

“‘Now, the needle might surprise you, Yarrott. Unfortunately, because we are withdrawing so much blood from you, we have to use one of the largest needles available, an eleven-gauge.’ I felt sick to my stomach when I saw what he was describing. It was the size of a large nail. ‘We could deaden the skin at the puncture, but I don’t really think you’ll need it.’

“‘Holy cow, Yarrott. That thing’s a monster. You want Novocaine or something?’ Charley was suddenly protective.

“‘No, I can handle it.’ I felt a new sense of confidence, being at the center of attention. I was about to be punctured to save my brother. Inside I was glowing with my sudden value to the world. I looked at Mother and Dan leaning against the wall, watching intently. Mother and I made eye contact and she beamed with her gorgeous smile. I felt invincible.

“After my arm was prepped with soap and iodine, I watched Claudia, the technologist, as she made circles around the spot like a target. She smiled at me, too. A quiet, brainy Ursula Andress. Dr. Sergent and she conferred quietly as they prepared for the first stick. Claudia tied the tourniquet around my upper arm and the vein stood out like a pale snake.

“With all eyes on my vein, Dr. Sergent pulled the plastic cover of the needle and laid the point down on the skin. ‘Here goes. You’re a real trooper, Yarrott,’ he said quietly as he shoved it in slowly. I wasn’t expecting the excruciating stick and gripped the hand piece so hard I thought I would break it. He entered the vein and a burst of red swirls shot into the clear tubing. The I felt a deeper stab of pain. ‘Oops, too far. Gotta pull it out a little. Sorry about that. Okay, now we have it.’ The needle was taped tightly in place. My first stick probably took a total of fifteen seconds, but it felt like fifteen minutes.”

Thus, the two brothers are bound to each other, geographically, emotionally, physically, throughout a period of life in which most of us are exploring adulthood in colleges many states away from parents and home.

Instead, both Charley and Yarrott live at home long past the time at which others have moved on. They and their parents live stunted lives in which sleep is hard to come by, breathing is shallow with panic, and a careful eye must be kept. A life in which expectation is everything—the expectation that the younger brother will willingly put his life on hold for years in order to be a living, breathing medication; the expectation that, against all odds, all medical rationale, that the older brother will hold his own, will recover and live; the expectation of normalcy when it comes to behavior, relationships, and sexuality—especially sexuality.

Benz balances his narrative well; he brings his reader into all the layers of his life that flowed forward concurrently during the seven years of treatments. While certain aspects of his life were frozen in place by necessity, other parts of existence evolve. Slowly, the boy begins to explore the world—albeit a tiny circumscribed chunk of it—as he gets a part time job, an apartment, and, for a short time, a boyfriend.

The Bone Bridge is mostly focused upon the years 1970 through 1983, the years of the treatments, and then the period afterward when Charley’s sudden remission allowed the brothers a freedom that they would never have predicted and for which they were ill-equipped. They test boundaries, especially geographic, as Yarrott rushes off to Italy, Charley (who still is more or less bound to that local hospital), to Arizona.

Time passes, hopes are at first high, until the decline. Until this:

“The call came on August 3. It was Charley. ‘Hey, little brother, I’ve got a terrible request to ask.’

“I knew what he needed. ‘Platelets, Charley? Do you need them now?”

In Yarrott Benz’s capable hands, the story of these brothers transcends the medical jargon, the description of hospital rooms, “get well” balloons, and chunky old television sets (television looms large here, as it does for all the chronically ill).

In Benz’s hands the tale is mythic, recalling Castor and Pollux, the Gemini twins, one is mortal, the other, a child of the gods, is not. The immortal, of course, is Yarrott, who must stand by, pink-skinned, healthy, and watch his brother die. He survives with all the guilt that survivors have.

And it is this guilt, as well as the anger, the love and the nearly overwhelming grief—as palpable and real today as on the day of Charley’s death—that propels the creation of this memoir, that gives the words on the page the power that they have as if the events happened only yesterday. Making this, perhaps, as much an exorcism as it is a memoir.

The Bone Bridge is not an easy book to read, but it is of a quality and a resonating truth that it demands to be read and shared and discussed and taught. The first chapters are long and Benz, from time to time, is given to self-indulgence. A better editor could have helped create a better result.

But no matter. As Billy Wilder told us, nobody’s perfect.

What we have in our hands is a tremendous achievement. A work of truth. The chapters involving the brother’s long march to death and the slow loss of his heartbeat are among the best ever committed to print.

The Bone Bridge is a book of brutal memories. It is hard to read, but impossible not to.