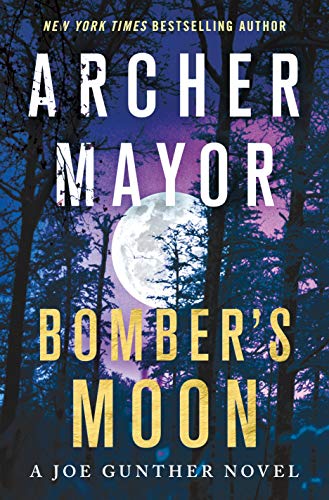 “Bomber’s Moon delivers action and adventure, passion and compassion, philosophy and pathos, deft characterization across diverse personalities and backgrounds, description of place so spot-on you’ll feel you’re standing in each scene, with a dollop of sex and romance.”

Series novelists all face the same challenge sooner or later: how to keep both their readers and themselves from getting bored.

It’s a seemingly inevitable outcome of writing about the same characters and places year after year. When you get up to 30 volumes in a series, like Archer Mayor has achieved, then one is almost nervous about reading the latest volume in fear that the author will have finally lost his or her inspiration.

Fear not, kind readers. Mayor long ago mastered the art of not being boring. And with Bomber’s Moon he has given us once again an intriguing, twisty, humanistic crime novel featuring Joe Gunther and his Vermont Bureau of Investigation team.

As usual, the plot follows many tangled threads that spiral out then twine back together. Here they include murder victims, petty thieves, master thieves, drug addicts and dealers, evil masterminds, pathetic victims, and innocent people as collateral damage—pursued and/or investigated by the VBI team, at odds with a young reporter and private investigator—until their discoveries twine together, too.

The action in Bomber’s Moon revolves around Brattleboro, Vermont, one of the cross-culture towns in this low-population state of northern New England. Mayor made his name writing about Vermont, a corner of the country not well understood by the rest of the United States. After so many stories set there, readers who live in the state, or near it, or even hundreds of miles away, continue to gain a realistic understanding of what the place is like on both macro and micro levels.

Mayor’s years of living in Vermont, his skill in evoking not just place but character, and his direct personal and professional experience in the state’s various law enforcement arms inform his police procedurals at an exceptionally high level.

Because he is a fastidious researcher on top of his firsthand knowledge, the story situations remain not only plausible but also scary because of that plausibility. For readers who live in Vermont, the plausibility cuts uncomfortably close.

Readers who started with book 1, Open Season, are by now well acquainted with Joe Gunther, who has advanced to chief of the elite VBI. His eccentric colleagues have stayed with him, and most are present in Bomber’s Moon. Readers entering the series with this new book will get enough background to follow the story without head-scratching, though they may miss nuances and references that series devotees will catch.

One of the reasons why Mayor’s books remain unboring is because he mixes up his troupe of characters and always introduces someone or something new. This might be a little frustrating for readers who prefer to stick with Joe, but he’s never too far offstage and is always involved in the story.

In Bomber’s Moon Joe is the reference point and dot-connector for multiple subplots and viewpoints. It’s a complex case pursued by characters from past books and likely future books, as well as the core investigation team. On-stage time is evenly divided among them, stitched seamlessly together.

Such “head hopping” is a common way to build suspense, especially in crime fiction where it’s almost impossible for a single character to know what needs to be known to advance the plot. Bomber’s Moon offers enlightening viewpoints from minor characters as well, such as the diver who finds one of the murder victims in a raging winter river. That short chapter simultaneously informs us about the harsh realities of the environment, of investigative work, of human dedication and suffering, and anonymous individual heroism like a cherry on top.

The book’s title is drawn from this description:

“There was a full moon, with nary a cloud in the sky, which, when combined with the fresh snow, lent a bright, almost pale blue boldness to the night, similar to the hue at the base of a gas flame. A bomber’s moon, he’d heard an old juicer once call it . . . a World War II term. Before lasers and radar and night vision were standard equipment on planes, night bombers ventured out over an enemy’s monochrome landscape, using only their eyesight to seek out targets, much as [he] was doing now.

“So far, so good, as the ancient drinker had commented, laughing. But beware what you wish for. ‘Whoever you target can target you in return . . . ’”

Bomber’s Moon delivers action and adventure, passion and compassion, philosophy and pathos, deft characterization across diverse personalities and backgrounds, description of place so spot-on you’ll feel you’re standing in each scene, with a dollop of sex and romance—all wrapped around a solid, informative, well-paced investigation. What more can one ask for in a novel?