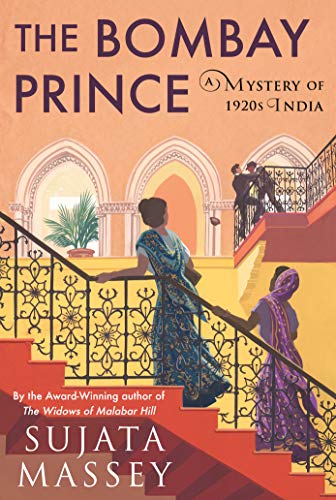 “The series anchor, Perveen Mistry, is one of the most delightful and engaging protagonists you’re likely to meet in historical fiction.”

Against the backdrop of civil unrest in November 1921, Bombay solicitor Perveen Mistry confers with a female college student who’s worried that her participation in upcoming protests against the visit of the Prince of Wales will result in her suspension or expulsion from school.

Shortly after their meeting, while attending a parade in honor of Edward’s visit, Perveen discovers that the student, Freny Cuttingmaster, has been killed on college grounds. While a clumsy attempt was made to create the appearance of suicide, Perveen’s suspicion that Freny was murdered is soon confirmed by a coroner’s inquest.

While investigating Freny’s activities before her death by questioning her friends, family, and school officials, Perveen identifies several possible suspects. However, the fact that she’s Bombay’s only female lawyer presents a series of barriers preventing her from making progress in her search for the truth.

Can she overcome systemic discrimination against women in positions of importance, and prejudice against Parsis like herself—who are seen as British sympathizers—to discover the identity of Freny’s murderer before the violence sweeping Bombay threatens her life as well?

The first novel, The Widows of Malabar Hill (2018), was a winner of the Mary Higgins Clark Award, the Lefty Award, the Sue Feder Macavity Memorial Award, and the Agatha Award for best historical novel. The second, The Satapur Moonstone (2019), while perhaps not as celebrated, was equally as good.

The series anchor, Perveen Mistry, is one of the most delightful and engaging protagonists you’re likely to meet in historical fiction. Self-conscious, serious-minded, and compassionate, she carries the reader through the complex milieu of early-20th century Indian culture and society with a grace and dignity that’s irresistible.

Her relationship with her father Jamshedji, the head of Mistry Law, is by turns amusing and vexatious. Her best friend, Alice Hobson-Jones, is back, this time as an instructor at the very college where Freny is murdered. And making a surprise reappearance is English civil servant Colin Sandringham, for whom Perveen formed a secret and enduring affection in The Satapur Moonstone.

Perveen is perfectly positioned by Massey as a pivotal figure in the historical context of this novel, a Parsi viewed with suspicion by Hindus, Muslims, and other ethnic groups in India, conflicted and challenged as Mohandas Ghandi’s political activism for independence from British rule sweeps the country.

And of course she also demonstrates the very long road ahead for women in India, Britain, and around the world, then and now, in the quest for equality. For example, it’s disturbing that both she and Alice, an Englishwoman, studied at Oxford without receiving degrees because of their gender. And that Perveen’s father must speak for her in many business situations because, try as hard as she will to be heard, her voice sometimes falls on deaf ears.

Massey has done a fine job of mixing history and mystery in this novel as well. The tour of Edward, the future king who was at this time the Prince of Wales and India’s nominative ruler, was a real event that she weaves into her story without effort. The murder could be connected to the political situation, or it might not be. Read on, reader, and find out.

While the narrative experiences a few minor irregularities and continuity problems that a better editing job might have combed out—more so than in the first two novels—this book is well worth your time and money.

Kudos as well to Janine Agro of Soho Press for another elegant and attractive interior and jacket design that once again enhances Massey’s work and adds to the pleasure of reading it. All three novels in this series are fine examples of what book publishing can achieve when it puts its products into the hands of someone this talented and creative.

The Bombay Prince is a delight to read and a welcome addition to a series that is rapidly becoming a favorite of mystery fans around the world.