The Bohemian Love Diaries: A Memoir 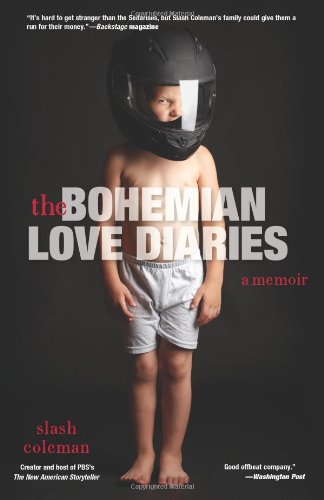 Unless you have no facility at all for language, it would be impossible to live in an unconventional (not to put too fine a point on it) family like Slash Coleman’s and not write a book about it.

Whether you’d do justice to your subject or not is, of course, another matter entirely.

Slash Coleman does—and then some.

Initially drawn to this memoir through a love of the talents of a different Slash, the ex-Guns ’n’ Roses heavy metal rock guitarist (Who knew his surname wasn’t Coleman? Not this reviewer. . .), my disappointment turned swiftly to delight as Mr. Coleman skilfully unfurled his topsy turvy life.

With a grandfather who danced at the Moulin Rouge, a mother who survived the Holocaust, and a genius of a wild-eyed drunken sculptor father, young Slash was destined if not for greatness, then for strangeness at least.

Which is enough to explain, perhaps, why he plucked the “quotation” from French artist Henri de Toulouse Lautrec which prefaces the book—“The greatest thing you’ll ever learn is just to love and be loved in return”—from film director Baz Luhrmann’s imaginary and slightly insane Moulin Rouge, rather than from the history books.

From a trip to the supermarket with his shirtless dad, who was clad in bleach-spotted jeans and a Nazi helmet with fake pigtails, when the author is just seven years old, through school days, religious secrets, romance, and an extreme preoccupation with dare-devil stuntman Evel Knievel, nothing in Mr. Coleman’s life is ordinary.

What could in less skilled hands have ended up as a freakish melodrama, a kind of gallery of the grotesque, is by turns darkly comic, side-splittingly funny, and poignant.

It comes as no surprise at all, given his off-kilter upbringing, to discover that the author, among his many accomplishments (award-winning actor, playwright, etc), is also “the personal perspectives blogger for Psychology Today.”