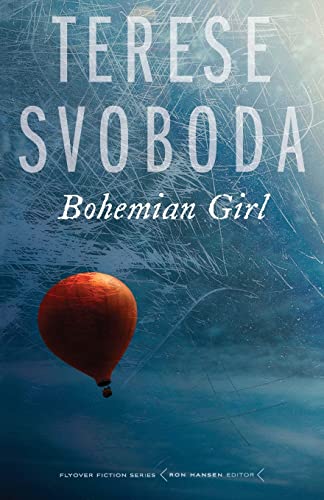 “[a] fast-paced captivating tale. . . . [an] incredible journey. . . . Readers who appreciate writing that is innovative, follows no rules, and is equally exasperating and enchanting will fully enjoy Bohemian Girl.”

Bohemian Girl by Terese Svoboda is a book not quite like any other. This novel has been compared to Willa Cather’s, My Antonia as well as Huckleberry Finn and True Grit—perhaps a bit of a stretch in all three cases; nonetheless, some books you can’t put down for diverse reasons. This book captures the reader with its ambiguous style, which can both draw and repel with equal intensity.

Fourteen-year-old Harriet is indentured to an Indian with no name given, by her fur-trading father as payment for a gambling debt. She is hobbled by “Indian” for four years, along with other white girls enslaved for life. Oddly, Harriet is sanguine about this and her years of shackled misery, which has caused a permanent limp.

Harriet escapes on the day of the end of her imprisonment before the crazy mound-building Indian can tie her to a tree and burn her, using her bones to strengthen his mound, as he did with other slaves. Harriet narrates her perilous adventure story and travails with irony, a touch of humor, and a strange acceptance as she searches for her Pa and sisters.

Terese Svoboda’s distracting lack of quotation marks to indicate dialogue is a deterrent to an otherwise fast-paced captivating tale. It is often difficult to determine who is speaking, as she rarely uses tags, and new characters in this incredible journey seem to pop out of nowhere.

Harriet’s travels through the untamed savage West of the 1890s lead her to help that appears from unusual sources, such as the traveling peddler she met while held by the Indian, Civil war soldiers who put her to work in the stockades, and traveling balloonists who make a quick landing after catching on fire.

As her travels continue, she meets up with a younger girl, Sharon, whose parents later perish from lightening strikes, as well as a small baby. The baby is quiet and has no one, so Harriet takes him with her. As they continue their journey, Harriet carries him on her back, not expecting him to live long due to lack of food and milk. Sharon distances herself from the baby and leaves him to Harriet until the day she sneaks off with the balloonists. The baby rarely cries, and as he miraculously grows stronger, he remains strangely quiet. Harriet takes care of him but shows little motherly affection—yet it is implicit. She tells those who ask that they are cousins so no one will take him from her. He is all she has.

Years pass and Harriet arrives at a small town in the midst of a shootout between soldiers and townspeople. During the battle she takes over the trading post of a recently shot owner and later tells the winning townspeople that the slain owner was her uncle. The baby, soon a boy of 13 with no name, is hers—yet not hers. And he knows it.

This story is told philosophically, with Harriet’s emotions demonstrated by her actions rather than her words. In spite of her obvious rejection of conventional writing formatting, Ms. Svoboda’s evokes a need in the reader to continue to delve into what is often lovely prose, albeit intermixed with disjointed, awkward sentences.

Sharon returns as part of a traveling troupe of opera performers and Harriet, stung by her betrayal, is her usual “complacent” self, simply accepting another strange episode in her young life. She suspects Sharon is the boy’s mother. Sharon denies this, but when she offers to take the boy with her, Harriet is defiant about keeping him.

In one of the best scenes in the book, Sharon asks Harriet to let the boy know one day that she is famous. And Harriet answers, “He doesn’t know you exist.” The following silence speaks volumes.

Terese Svoboda’s unusual, yet wonderful narrative reaches its apex of richness and character development as the book draws to an ending as unpredictable as the book itself. The author does come almost full circle at the finish—and then simply stops telling her story, leaving the loose ends interwoven throughout the book. Readers who appreciate writing that is innovative, follows no rules, and is equally exasperating and enchanting will fully enjoy Bohemian Girl.