Body of Stars: A Novel 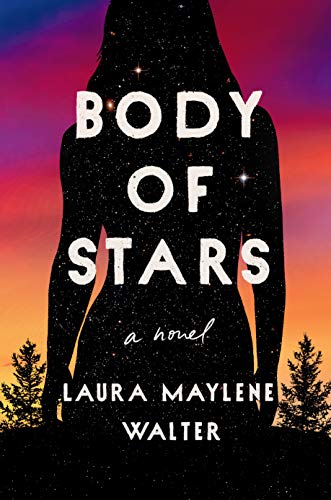 “an incredibly strong debut that hits a number of sweet spots—feminist literature, dystopian/speculative fiction, and young adult literature. It’s well worth your time.”

The best dystopian and speculative fiction highlights a societal weakness and forces the reader to see it in a new way. Debut novelist Laura Maylene Walter cleverly does this in Body of Stars, which focuses on a world much like our own except for one thing: the markings on women’s bodies can foretell the future. It’s the perfect vehicle to demonstrate the paradoxical place of women in society—is she revered, protected, or policed? And how do you know where the lines are drawn?

In Body of Stars, the freckles, moles, and birthmarks on a girl’s body can and do change. In mid-adolescence (around age 16), girls go through their changeling period, when their markings become permanent and when, for several weeks, they have the benefit of hyper-acuity and hyper-attractiveness. They are, for all intents and purposes, irresistible. In the words of the novel’s narrator, Celeste, “The time before the transition to adult markings was like watching a wave bear down on the shoreline: waiting for the crash, for the turmoil and confusion, before the sand could be smoothed into a fresh surface again. When it arrived, girls had the benefit of new predictions, but they were also thrown into the chaos of the changeling periods—those risky, unpredictable weeks when they would be irresistible to nearly everyone, but especially men.”

One visit to a porn site or adult bookstore in the real world is a reminder that beautiful teenage girls are a fetish, a sexual aspiration. In the world of Body of Stars, they are seemingly the only fetish. Sometimes girls are abducted during their changeling period. They are raped and their markings copied, later to be traded on the underground market in the same way pornographers share photos and videos in our world. Once their changeling period is over, the girls are no longer irresistible and thus deemed useless. They’re let go. But girls who’ve been abducted face new challenges. As Celeste says: “To be abducted indicated a moral failing, a lapse in judgement and restraint that pointed to more serious deficiencies.”

There are professional interpreters who make a living studying markings and helping women map out their futures. (Every household has a well-used copy of a book called Mapping the Future, parts of which are cleverly excerpted in the text.) Celeste’s older brother, Miles, is an anomaly: a man who wishes to become an interpreter. He studies with a woman named Julia, one of the few people who supports his unusual desired career path. Celeste’s and Miles’ shared affection, history, and occasional rivalries are particularly well drawn, elevating their very believable sibling relationship nearly to the level of another character.

Through this unique story, Walter questions the idea of whether biology is destiny, whether we can change our fates. In a key scene, Julia tells Celeste:

“The future will come for you as it intends. . . . That is undeniable. With time, however, you’ll see that your actions might make a difference. Not a dramatic difference, but even the slightest change might be meaningful. We do have free will, after all. Think of it as wind moving through the leaves of a tree.”

Julia released one hand from mine and swept her arm up to conjure a tree in the air between us—her forearm the trunk, her fingers the branches, the thick frenzy of her hair transforming, in my mind, into a leafy canopy. “The tree itself remains the same, but the manipulation of leaves creates altered shapes, shadows, sound. The greater form is unchanged even as it is made anew. Do you see?”

I blinked at her.

“That’s all right,” she said. “You’re a smart girl. You’ll understand one day.”

Shaken, I rubbed my arms as if to shed my confusion. The entire point of interpretation was to submit to an irrevocable future. Depicting a future as fluid as wind rushing through leaves didn’t make sense. Our markings couldn’t reveal everything that would come to pass, but seeing even a glimpse was a relief. It was what drove people to interpreters, to study Mapping the Future, to plan their careers and marriages based on what was already fated.”

The success of Body of Stars rests on this truly clever conceit and Walter’s ability to use it to tell a compelling story while also illuminating the challenges that entrenched rape culture (and its handmaidens, victim blaming and slut shaming) still pose to genuine gender equity. If one gender requires protection from the other, which gender is truly the problem?

It isn’t a perfect novel. There are a few too many “little did I know” moments early on, but those are small flaws in what is an incredibly strong debut that hits a number of sweet spots—feminist literature, dystopian/speculative fiction, and young adult literature. It’s well worth your time.