Body Counts: A Memoir of Politics, Sex, AIDS and Survival 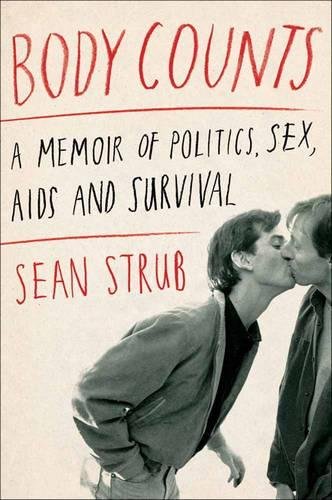 “It is a beautiful thing to know that in spite of such horrible loss, there are those who have survived and so many others whose young lives now lay before them. Body Counts is another book that recounts the long, hard, lonely battle against the AIDS epidemic. Importantly, it is the first with something like a happy ending.”

Body Counts: A Memoir of Politics, Sex, AIDS and Survival is a hard book to read.

In spite of this—or perhaps because of it—it is important that this book be read.

For readers too young to think of AIDS as anything more than a chronic condition, Body Counts acts as a history, reflected through the eyes of one man, of a time in which it seemed that a wildfire would ravage through the whole of the earth and consume us all. A time in which an entire generation was lost. A time not yet truly ended, no matter how many millions now live in denial of the disease and its ramifications, both personal and cultural. A time that, to a great extent, defines our own.

For readers old enough to remember how it felt to hold one’s breath for the two weeks it took to get laboratory results, how it felt to hear Larry Kramer’s voice counting counting the ever increasing numbers of those who had died horribly, mysteriously, while the president’s voice stayed silent as the man refused, for more than five years, even to say the word AIDS, or how it felt to count on one hand, or two, or five or ten the number of friends lost, some so quickly that it seemed that they were laughing only the week before, others slowly, torturously, Body Counts reminds of just how few of the wounds have healed.

Like here, where author Sean Strub describes his bout of Kaposi’s Sarcoma—skin lesions that announced the final stages of the disease had begun, usually giving the patient nine more months of life—reminding that they started out as a “small reddish mark on my torso that was barely the diameter of a dime, but soon “became nearly the size of my hand and developed a waxy black surface of necrotizing tissue”—is enough to still send the reader to the mirror, shirt raised.

Body Counts is best at moments like this, when author Strub just says it, as here, where he writes:

“When the Black Plague killed a third of the population of Asia and Europe in the middle of the fourteenth century, civilization gave way to barbarism. Societies were destabilized, families were destroyed, leaders abandoned their people, the rich fled, and Jews were blamed and burned.

“AIDS did much the same thing in 1980s America. To say the Reagan administration abandoned people with AIDS implies that it was once at their side, however, and that was never the case, not for a single minute. Many of the rich and powerful turned a blind eye to the death and suffering, rationalizing AIDS in religious terms as God’s punishment of homosexuals, even secretly welcoming AIDS as a eugenic societal cleansing. Instead of Jews, it was the gays, intravenous drug users, and Haitians who bore the brunt of blame in the early years. They weren’t burned, but they were left to die just as surely.

“Broader society’s neglect was only part of the problem; the gay community, while demonstrating profound love in caring for those who were sick and dying, made important mistakes of both omission and commission in those early years. Painful and politically unpalatable truths got in the way when a culture of unfettered sexual liberation was threatened by a terrifying struggle for survival.”

But Body Counts, unlike Randy Shilts’ And the Band Played On, is not a journalistic investigation into political/societal/scientific grapplings from the onset of AIDS onward. Nor, like Paul Monette’s extraordinary Borrowed Time, is it a focused, purely personal memoir.

Body Counts is rather a mash-up of both, which leaves the reader admittedly perplexed as he wades through page after page of Strub’s adventures as a young man in Washington, DC, when, thanks to some political pull from his native Iowa, he had the chance to run an elevator in the Senate building (“When not ferrying passengers, I rested my elevator on the Capitol’s second floor, outside the majority leader’s office and just a few steps from the Senate chamber’s main entrance.”).

The reader is further put off by any of the several celebrity cul-de-sacs that the book offers, from a very young Strub’s flirtation with a forever-inebriated Tennessee Williams, to Andy Warhol exclaiming that, when it came to fixing a Selectric typewriter, Strub was your man, or, worst of all, by including John Lennon’s body among those counted, by the long recounting of the fact that Sean Strub was among those who were standing outside the Dakota while Lennon lay bleeding on the sidewalk.

All are interesting enough anecdotes for a different, lighter book, but seem out of place here—most especially in that none of them serve the narrative in any way other than to have the reader believe that Strub, Zelig-like, has made it his business to get himself front and center in as many culturally key moments as possible.

And these celebrity drenched moments seem to be the least important reasons for us to want to know Sean Strub.

The heart of the book has nothing to do with celebrities or parties or fundraising or political conventions. And while the book celebrates myriad admirable ways in which the gay community as a whole and Sean Strub as an individual rose up to combat the threat of death that AIDS represented, the purpose of the book is contained in a single word in the subtitle.

For while politics, sex and AIDS are all important aspects dealt with in this memoir, it is, at the heart of it, an examination of survival.

And this is the key way in which it differs from all the earlier books, notably Shilts’s, which was written at a time in which the horizon was still dark, and Monette’s, which, sadly, now stands testament to the incredible talent of a man who died too young.

The magnificence of this work is that it exists in a day in which fear has given way to hope and a sure death sentence is no longer quite so sure.

As such, this volume tells a more complex tale than those that have come before, as it traces the paths that were followed, by the gay community, by the nation’s scientists and doctors and patients and politicians, by the American people themselves, from the vantage point of, if not the end of the journey, then certainly the point at which we can rest a moment, believing, “we’re going to make it.”

It is from this vantage point that Strub writes:

“What ultimately drove me to devote so much of my life to the epidemic was my own sense of mortality, and a desire to leave a legacy that transcended my entrepreneurial success, as much as it was the AIDS crisis per se. Nor do I believe I did enough soon enough, especially in the earliest years of the crisis.

“I’ve had it much easier than most people with HIV. I have never gone hungry or homeless, I received a good education, always had healthcare and always felt loved.  Even at my sickest, I was only occasionally in serious pain and was never hospitalized.

“I have to acknowledge that AIDS, as horrific as it has been, has shaped my character, centered my values, and taught me important lessons. I’ve learned that life has the most meaning when I advocate or care for others, and that activism itself is most powerful when the voices of those at the center of the suffering and injustice are heard most clearly.”

Body Counts is a study of health regained and wisdom earned, a book that, while facing history square on, is pointed firmly toward the future as it recounts the stories of men and women who, facing their own on-racing mortality, stood together and fought together and in the end outlasted the certain death that once was AIDS.

Sean Strub, most notably the founder and publisher of POZ magazine among many other achievements, writes powerfully, movingly, as in this moment, when, after nearly dying, his health was to a great extent restored by the use of the protease inhibitors that have extended the lives of countless others:

“It took time to adjust to the prospect of having a future. Something as simple as buying new clothes felt like an expression of optimism about my future that I may or may not have felt in that moment. I had the dental checkup that just a few months before hadn’t seemed worth the effort. I began to sort out my finances, which were neglected while I was coasting toward my demise. And I started seeing old friends and acquaintances I had not been in touch with for years. Sometimes those reunions were awkward because they, too, had to adjust to the fact that I was not longer within sight of death.”

It is a beautiful thing to know that in spite of such horrible loss, there are those who have survived and so many others whose young lives now lay before them. Body Counts is another book that recounts the long, hard, lonely battle against the AIDS epidemic. Importantly, it is the first with something like a happy ending.