The Body in the Boudoir (A Faith Fairchild Mystery) 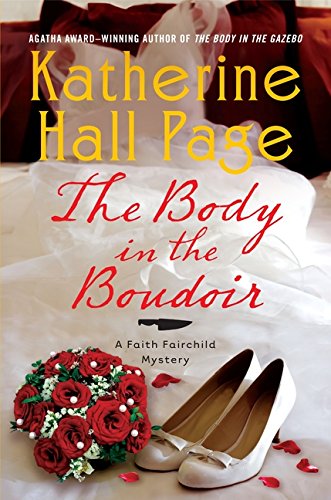 In long-running series that don’t begin early in the lead character’s life, the author sometimes fills in the blanks with a prequel. Ms. Page gives that idea spin by offering a sequel to a prequel in her 20th Faith Fairchild mystery.

The Body in the Boudoir takes Faith back to 1990 after her catering business (launched in the first prequel) has gotten off the ground and becomes something she never wants to give up; however, upon falling in love with Reverend Tom Fairchild, whom she meets at a wedding she’s catering, she has to choose between her heart and her career.

Choosing Tom means leaving her beloved New York City for his parish in small-town New England, and either reinventing her business or leaving it behind.

Series followers already know the outcome of this dilemma, but new readers will share Faith’s difficulty in making the choice then get to enjoy her later adventures in (almost) chronological order. In this volume, while she’s agonizing in her heart, she also solves three overlapping domestic and financial mysteries—one of which jeopardizes her life.

Faith gets pulled into these mysteries not only because they involve friends and family, but also because she suffers from too much curiosity—the curse of the amateur sleuth in the cozy-mystery genre.

Faith differs from many such sleuths in that she doesn’t have any acute problems. She comes from financial security most of us would envy, with a similarly enviable close and loving—and charmingly eccentric—family.

She has an even temperament, and the work she loves is successful without years of struggle. The mysteries she solves are often lacking in drama on the outside but nonetheless emanate from hidden passions. Faith follows her curiosity and compassion until she uncovers the truth.

Fans of the series will find Body in the Boudoir consistent with the previous Body in . . . titles, which themselves have been consistent. Ms. Page, in fact, consistently delivers consistently entertaining stories about a consistent heroine. As such, readers new to the series will get a fair introduction, while established readers will learn more about characters they love.

Note that “consistent” does not mean “boring.” Ms. Page pulls the reader along with a steadily advancing plot, interesting observations about place and people, witty and natural-sounding dialogue, informative tidbits about food (complete with recipes), original crime scenarios that are neither too easy to figure out nor too complicated to follow, a likable and credible heroine supported by an engaging cast—all woven together into a smooth and seamless read.

In the same way that Faith delivers delectable food to her clients, Ms. Page provides a gourmet treat for cozy mystery lovers.