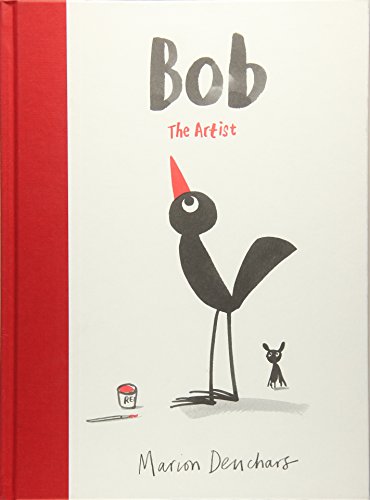 Bob the Artist is a 32-page hardcover picture book about self-acceptance and bullying.

No matter where he goes Bob is a bird who gets teased by other animals because of his long skinny legs. Being self-conscious about them Bob tries to do some body building to thicken them up, but that doesn’t work. He then tries to gain some weight, but that doesn’t work, either. It isn’t until Bob visits an art gallery that he comes up with an idea. He decides to use artistic color by some well known artists to detract the animals’ attention away from his legs by painting his beak.

This, ultimately, gets the other animals to like him more by looking at him in a different, more artistic, appreciative, way. Other birds begin to envy Bob’s colorful beak and in so doing give him self-confidence. This, in turn, helps him get over his skinny legs.

Many children will be able to relate to Bob the Artist, especially if they are getting bullied because of their appearance. The lesson to be learned is that one must accept one’s appearance in order for others to accept it as well.

One little quibble is that one shouldn’t have to detract against one’s differences for others to appreciate them. This sends the wrong message. If someone doesn’t like you for who you are then you shouldn’t have to change or modify your appearance to appease them. In this instance, the bird painting his beak different colors would probably have made him more of a bullying target.

Painting Bob’s legs different colors would probably have made more sense. Then it would have been a very unique canvas indeed and something different—and enviable!—from other birds.

The author did a great job combining art with the characters in this book, some of which she brought forth from her other books. The concept of using art to inspire readers of all ages and relaying to them that standing out is much more fun than fitting in is something readers with differences, real or perceived, will appreciate.