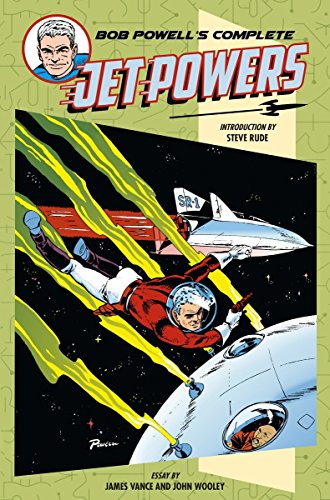 The work of Bob Powell, a comic book artist active from the 1930s to the 1960s, was a talented artist, but he is likely never to be considered at the level of Will Eisner (whose shop he once worked in), Wally Wood, or Jack Kirby.

So one has to wonder why Kitchen Sink Books and Dark Horse Books have gone to the trouble to preserve some of Bob Powell’s work on a character called Jet Powers in a handsome, fifty-dollar hardback book. One simple answer: “Well, why not?”

It is not one of the great injustices of comic book history. For one thing, Jet Powers was possibly the ugliest comic book hero ever created. Especially as the super scientist. He is less ugly as the fighter jet pilot. The super scientist stories are super silly, except for a couple stories detailing a poisonous dust cloud from space that wipes out most of humanity. They are a bit more chilling than silly. The villains are Asians or aliens and all are uglier than Jet Powers—which is saying a lot.

The Korean War stories are, in contrast, down-to-earth (or just slightly above earth in the war-torn clouds). Like war they are violent and bloody but do not seem to be a glorification of the war. Neither are they critical of it. The real purpose of the books may have been the opportunity to “fly” jets in dangerous skies, which Powell does quite successfully.

The most interesting note to make may be that these comics did not carry the Comics Code seal, nor adhere to the industry self-regulation it represented. Thus they were comics that certain kids must have read with relish—and certain parents must have viewed with dread.

Maybe that is Jet Powers’ claim to his own bit of historical preservation in this book.