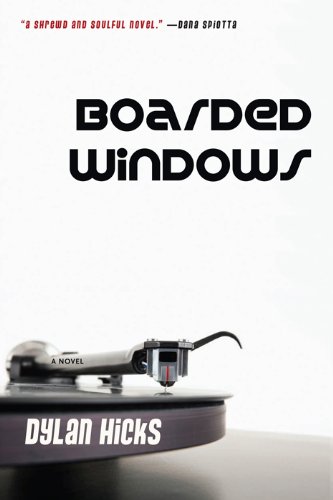 “For a narrow niche of readers, Boarded Windows could be that once-in-a-generation revelatory depiction of an under-explored subculture—in this case, the Northern Plains slacker-intellectual. For the rest of us, it is an undisciplined debut novel, but one that showcases great skills and intelligence. To use Mr. Hicks’s own phrase, the saving grace of Boarded Windows is “‘the pleasure of intermittent brilliance.’”

Wade isn’t really a bad guy. When times are good, he gets by playing guitar for second-tier country musicians. When times are bad, he works odd jobs and mooches. But he’s too cultured and charming to ever be considered a bum. Wade takes and sells drugs—but with too much self-control to fall into addiction, and without enough capitalist drive to ever be a dealer.

As a young man, Wade had different girlfriends and lived with one particular girlfriend for several years. He became a father figure to the boy of that girlfriend. That boy grew up to become an assistant manager at a lagging record store, boyfriend to an unfunny comic named Wanda, and narrator of Dylan Hicks’ sophisticated debut novel, Boarded Windows.

The book, set in the Upper Midwest, spans 40 years of personal history. At the edge of the storyline throughout the proceedings sits fictitious country musician Bolling Greene, Deist God to an aging and shrinking cult of fans.

The great strength of Boarded Windows is Mr. Hicks’s subtlety and droll wit. His plot is not built around a single climactic event, but rather hopscotches around various decades as the main characters interweave and inform each other’s lives. Stretches of the book are highbrow examinations of lowbrow topics. For example, author Hicks devotes three pages to a humorous discussion between the narrator, Wanda, and Wade about the ideal music to accompany sex—with arguments made for and against Van Morrison, John Phillips Sousa, 70s funk artists, and others.

Perhaps Mr. Hicks‘s greatest skill is the cleverness with which he employs the non-omniscient eyes of his unnamed narrator. Toward the book’s end, for example, Wade discusses his stormy breakup with the narrator’s mother. The narrator doesn’t know if Wade’s story is true, especially as parts of it disagree with his own childhood impressions. The reader must deduce whose recollection is more accurate.

At other times, such as the many discussions about Bolling Greene, the narrator’s knowledge is similarly limited. Mr. Hicks plays on that limited knowledge to push the reader forward.

Despite Mr. Hicks’s deft hand, Boarded Windows is a labored read. Many sentences are the length of short paragraphs, and many paragraphs are more than a page. Mr. Hicks‘s long asides on dozens of popular and obscure 1970s and 80s musicians might appeal greatly to a small niche of zealots, but struck this reviewer as monotonous and self-indulgent. (This is a particularly difficult criticism to pen for a reviewer with nearly 1,000 LPs in his basement.)

A similar criticism could be offered about Mr. Hicks’s many asides about French intellectuals. The majority of these asides could have been shortened and summarized without sacrificing character development or plot. Reluctantly, this reviewer self-edited at times, choosing to skim several of the book’s longer paragraphs.

For a narrow niche of readers, Boarded Windows could be that once-in-a-generation revelatory depiction of an under-explored subculture—in this case, the Northern Plains slacker-intellectual. For the rest of us, it is an undisciplined debut novel, but one that showcases great skills and intelligence. To use Mr. Hicks’s own phrase, the saving grace of Boarded Windows is “the pleasure of intermittent brilliance.”