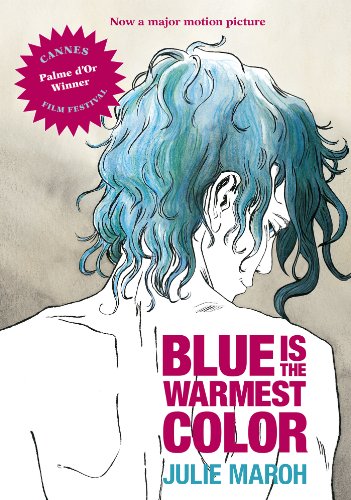 Blue Is the Warmest Color may sound familiar. This graphic novel was adapted into a film and won the Palme d'Or at the 2013 Cannes Film Festival.

In this Parisian coming of age story, high school student Clementine meets Emma, an art student seemingly brimming with confidence, capped by her blue hair. Alas, Emma is with Sabine, not only her girlfriend but also her mentor, and is unable to commit openly to Clementine.

Julie Maroh’s style of drawing owes a big debt to manga, the graphic novels of Japan, in style if not in content. It’s beautiful, from the slouched hat Emma wears to the rumpled clothes of Clementine. Ms. Maroh understands the contradiction that although teens crave individually, they dress incredibly similarly.

The novel is at its best when it delves into the attitude of the French toward gays and lesbians. If Americans think the French incredibly accepting (remember back in 1996 when the widow of François Mitterrand invited Anne Pingeot, his longtime mistress, to his funeral?) they are in for a shock here. Clementine’s parents are disgusted with her choice, and when she seeks solace in a café, patrons are openly offended at the Gay Pride parade on television.

Where’s a young lesbian to turn?

The graphic novel format also allows the reader to easily see this being made into a film. Whatever the movie looks like, and it would be nice if it retained some of the beauty of the novel, it’s impossible to say whether people will see it to marvel at the beauty of the sex scenes, or to appreciate the “first love” story. Perhaps viewers will come away thinking of their own first love and remember the sensation of everything being writ large. The emotions, the meals, the discussions, everything seemed so significant.

And if the book or the movie evokes that, it’s not a bad tribute, eh?