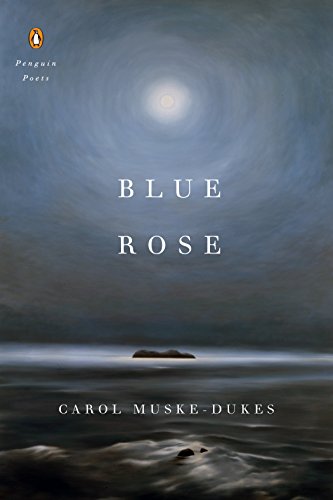 Carol Muske-Dukes opens her eighth collection of poems with a vision of life seen all the more radiant for its closeness to death. The title poem of "Blue Rose" is set in a labor room where the poet's daughter is born "danger blue,"

yet to me her color appeared

something never imagined: if-flower of myth,

bloom on the isle of the color-blind, far

from our spectrum. Red to magenta to a breath

The music of those lines rises and swells throughout this beautiful book along with its theme of life's fierce tenacity. Accompanying that theme is an intricate pattern of imagery, especially of brightness: just as the baby daughter is shown "entering light," the poet's aged mother, near death but resisting death, is admonished, "Go to the light." Following the title poem, the ailing woman is portrayed in what is aptly called, "Live/Die: A Ghazal." A poignant lament ends this version of the ghazal form, couplets with "live" and "die" at the close of each line:

for you, I don't know how. You brought me here alive.

You taught me everything but how to let you die.

In the poet's view, life is constant motion, fast, unstoppable: a ferris wheel that keeps turning; wild west wind; Mark Twain remembering days as a steamboat pilot; the memory of herself as a child who "kept turning like a top." And in a terrifying poem called "No Hands," its lines enjambed so as to increase their speed, a cyclist with a failed brake is unable to stop or slow down. In chilling dread, the speaker is watching her small daughter behind him holding on for her life as he flies free in "the will's eventual triumph / over stasis." The poem ends with an observation about life's unrelenting persistence that is also a subtle reference to poetry. The cyclist's flight is unyielding, like life itself:

so what cannot stop holds on, holds on

to a mind flying away from itself, seeking

release from the soul speeding away, yet

staying close as breath, even at this distance.

In an earlier poetry collection, "Sparrow," Muske-Dukes elegizes her husband, David Dukes, who died suddenly at 55. A later volume, Twin Cities, finds her, propelled by his absence, running in high gear between New York and California. In life, Muske-Dukes is her state's poet laureate and professor at the University of Southern California. There she teaches still, having founded its graduate program in Creative Writing and Literature.

Now in Blue Rose, the poet focuses on the lives of brave women, often of the past. A notable instance is Ina Coolbrith, who in the 19th century was the predecessor of Muske-Dukes as California's first poet laureate. Another is Paula Modersohn-Becker, a 19th century artist who challenged the convention of her time in being a woman who painted nude women. And in like manner, she pictures bold women of our time. She salutes the women prisoners she taught on Riker's Island who, though they were allowed only pencil, bore down hard, hoping that their poems would last. And she tells us of a doctor in Kashmir, who, though distrusted for being a woman and of the Hindu culture, continues to treat pregnancies. Because of a keen intelligence, the poet's portrayals are neither sentimental nor occasions for protest. Instead they are colorful, accurate, and strikingly alive.

Still, one of the most astonishing poems here is not about fearlessness: it is of a little girl painting the moon through the falling ash of a terrible California fire. "Wildfire Moon (Summer, L.A. 2016)" ends with these arresting lines:

No one else will ever render it so,

a world on fire burning within this

world that her fingers summon tonight,

Muske-Dukes is a poet engaged with contemporary struggles. She confronts a world on fire, its people in need of reform. In her work issues such as gun control, injustice, and abortion are confronted and transformed, as truths made into art. And yet her rich images—light, wild color—tend to cluster perhaps willy-nilly around the themes of art and the artist. As with life, the act of writing poetry is shown to move and keep turning, fast, unstoppable, by a powerful act of will.

And for her, modern science is all of a piece with art. The book ends with her daughter, Annie, the "danger blue" baby now grown into a healthy research scientist. Seeing her at a transmission electron microscope, Muske-Dukes remembers how, as a child, Annie picked a white rose from the garden and dyed it blue. Now, considering her essential scientific studies, she sees her only as "my blue rose / my wonder." So goes the blue rose image, with its subtle implications as a symbol of mystery in Romantic thought, into an icon of beauty in a shattered universe, a "world on fire."

Grace Schulman is the author of a number of books of poetry and the forthcoming memoir, Strange Paradise: Portrait of a Marriage. She received the 2016 Frost Medal for Distinguished Lifetime Achievement in American Poetry awarded by the Poetry Society of America. She is Distinguished Professor of English at Baruch College and has previously taught poetry writing at Princeton University, Columbia University, Wesleyan University, Bennington College, and Warren Wilson College.