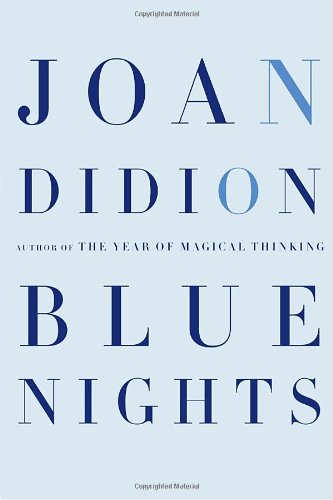 “And perhaps this is the difference between this book and Magical Thinking. There, in the previous work, Ms. Didion wrote in a state of shock, a place of mourning and loss. Here, in a book that exists within the context of the blue nights, the gloaming, she conjures her daughter Q, evokes her spirit—and finds it so very full of life.”

Books by Joan Didion are noted, among other things, for their opening lines. They share the trait of beginning with quick cuts, surgical slices of imagery that suggest what is ahead.

Her last book, The Year of Magical Thinking, a meditation on the death of her husband and the timeline that unfurled afterward, began with a poem:

“Life changes fast.
Life changes in an instant.
You sit down to dinner and life as you know it ends.
The question of self-pity.

“These were the first words I wrote after it happened.”

The work of jump/cut genius that is Play It As It Lays begins with considerations of snakes:

“I never ask about snakes. Why should Shalimar attract kraits. Why should a coral snake need two glands of neurotoxic poison to survive while a king snake, so similarly marked, needs none. Where is the Darwinian logic there. You might ask that. I never would, not any more.”

Her new book, Blue Nights, begins with an aria:

“In certain latitudes there comes a span of time approaching and following the summer solstice, some weeks in all, when the twilights turn long and blue. This period of time does not occur in subtropical California, where I lived for much of the time I will be talking about here and where the end of daylight is fast and lost in the blaze of the dropping sun, but it does occur in New York where I now live. . . . You pass a window, you walk to Central Park, you find yourself swimming in the color blue; the actual light is blue, and over the course of an hour or so this blue deepens, becomes more intense even as it darkens and fades . . . During the blue nights you think the end of day will never come.”

I specifically mention these other works along with the new in that they seem as if they were its direct antecedents: works that deal, each in its own way—Magical Thinking, more obviously, a companion piece to Blue Nights, Play It more subtly, as the two works dawdle among arid memories of California sun with splintering wooden decks and agapanthus—with the core insight of Blue Nights. As Ms. Didion puts it:

Indeed, the works of author Joan Didion are filled with warnings. Snakes under rocks. Sudden death at the dinner table. Other deaths, much too young—a niece murdered, a daughter slowly coddled into the grave. Lives, in these books, are minefields, so tread carefully.

Of all her past works, perhaps the one that is most logically in the bloodline with the present work is A Book of Common Prayer, which is, in some ways, actually prophetic. The opening line, a widowed mother speaks of her daughter, Charlotte:

“I will be her witness.”

The story, from there, turns, veers, politicizes. But that idea: “I will be her witness.” The mother must stand in for the daughter, gone too young. The mother writes:

“She dreamed her life.
She died, hopeful.”

That last word, that “hopeful,” is perhaps the thing that all loved ones conclude, a word that they put in the mouth and heart of the deceased, not through an real knowledge, but because of their own hopefulness, their own desire that such a thing can be true."
The idea then, the upsetting, tantalizing notion of parent filling in the life space for the child who has gone on prematurely, in breaking with the laws of nature, comes to Ms. Didion from her own fiction. But here, in Blue Nights, it is realized in fact.

We are given a slide show of images.

Of her daughter’s birth:

“She was born in the first hour of the third day of March, 1966, at St. John’s Hospital in Santa Monica. We were told that we could adopt her late the afternoon of the same day . . . I was taking a shower and burst into tears when John came into the bathroom to report that [obstetrician] Blake Watson had said. ‘I have a beautiful baby girl at St. John’s,’ is what he had said, ‘I need to know if you want her.’”

Of naming her daughter:

“When they asked us at the hospital what we would call the beautiful baby girl there had been no hesitation: We would call her Quintanna Roo. We had seen the name on a map when we were in Mexico a few months before and promised each other that if ever we had a daughter (dreamy speculation, no daughter had been in the offing) Qunitanna Roo would be her name. The place on the map called Quintanna Roo was still not yet a state but a territory.”

Of the stuff that was Quintanna Roo:

“When she was eight or nine and enrolled Junior Lifeguard, a program run by the Los Angeles County Lifeguards that entailed being repeatedly taken out beyond the Zuma Beach breakers on a Lifeguard boat and swimming back in, John and I arrived to pick her up and found the beach empty. Finally we saw her, alone, huddled in a towel behind a dune. The lifeguards, it seemed, were insisting, ‘for absolutely no reason,’ on taking everyone home. I said there must be a reason. ‘Only the sharks,’ she said.”

Of this, perhaps the last and finest of the healthy memories—her wedding, a memory that is evoked again and again, here:

“The white peacock spread his fan. The organ sounded. She wove white stephanotis into the thick braid that hung down her back. She dropped a tulle veil over her head and the stephanotis loosened and fell. The plumeria blossom tattooed just below her shoulder showed through the tulle. ‘Let’s do it,’ she whispered.

And here, this brief, final image:

“Something else I still see from that wedding day at St. John the Divine: the bright red soles on her shoes.

“You saw the red soles when she kneeled at the altar.”

And then there are images of illness, many such images.

The slow, sad death of Quintanna Roo is among those things that should never happen—yet do. And yet, she seems always running through the pages of Blue Nights. Always having the last word.

And perhaps this is the difference between this and Magical Thinking. There, in the previous work, Ms. Didion wrote in a state of shock, a place of mourning and loss. Here, in a book that exists within the context of the blue nights, the gloaming, she conjures her daughter Q, evokes her spirit—and finds it so very full of life.

Because of this, surprisingly little of Blue Nights takes place in ICUs or is spent listing symptoms, treatments, or responses. And what there is of medical imagery is applied instead—How could it not?—to the author herself, with her increased awareness of mortality and her increased sense of frailty. (“I fear falling on the street. I imagine bicycle messengers knocking me to the ground. The approach of a child on a motorized scooter causes me to freeze mid-intersection, play dead.”)

But then there is this:

“On the afternoon she herself died, August 26, 2005, her husband and I left the ICU overlooking the river at New York Cornell and walked through Central Park. The leaves on the trees were already losing their intensity, still weeks from dropping but ready to drop, not exactly faded but fading. At the time she entered the hospital, late in May or early in June, the blue nights had just been making their appearance.”

During her periods of illness and health, Qunitanna Roo admonished her mother not to “dwell on it,” (her illness) but to (like her daughter) live in defiance of it. And so Joan Didion does, still today. In telling the story of her daughter’s life and death, Ms. Didion remains in the gloaming, the time of long afternoons that yield only slowly and with gentle effort to the darkness that is ahead.

The simple poetry of Blue Nights identifies it as a work of Joan Didion. But the context of it—a human being, alone, disconnected, and playing dead—suggests the work of an author now profoundly changed by age and circumstances who is using the best and sharpest tool at her disposal—her placement of ideas on the page—as a means of discovery for what is ahead.

Where words like “unflinching” have always described Joan Didion’s sharp prose, here there something new, an obvious flinch suggesting that from all that she has learned of loss of late, she is all too aware of what lies ahead.