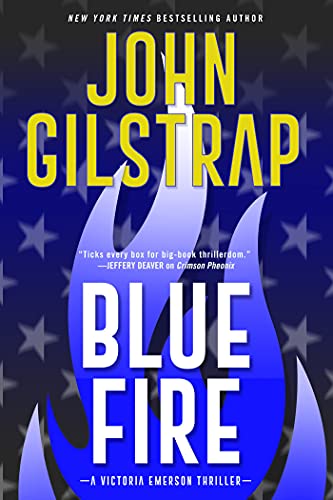 “a John Gilstrap thriller, crammed with violence and testing of the soul, might be the perfect work of fiction to sink into in a tough time for the real world.”

Global pandemic. Rising sea levels. Powerful nations making threats. When all that news of the moment seems too much to handle, it’s time to pick up the newest in the Victoria Emerson thriller series from John Gilstrap, Blue Fire.

Gilstrap’s most extensive series, with protagonist Jonathan Grave, took the action to both international escapades and American militia terrain, always featuring the explosive skills of Grave and his main sidekick, Boxers, aka the Big Guy. Connected unofficially with American government, Grave and his team applied skills that mirrored expertise Gilstrap acquired himself in explosives safety and hazardous waste.

In 2021, Gilstrap’s first Victoria Emerson thriller proposed an America on the brink of nuclear war. Emerson’s a US congressional representative for the state of West Virginia, and when she’s ordered to enter a safety bunker without her three teenage sons (she’s a single mother), she refuses and finds other shelter.

As Blue Fire opens, Victoria Emerson’s running a survival-based town where she’s never without both a handgun and an M4 rifle. Her former government status isn’t well known, but her leadership skills have made her essential, and she’s maintaining the safety of a growing population there.

You know how it is: If you’re doing better than the folks around you, someone wants in. This time, for Emerson’s town of Ortho, West Virginia, invaders jealous of the community’s relative prosperity launch a coordinated attack. The process of holding them off demands that each of her sons become a leader, too—and face dangers that no mother wants near her family. But if they’re all going to make it, Emerson’s got to both let go and teach skills like crazy.

Her oldest son, Adam, is out there on his own, probably headed toward the family’s home farm. But Emerson and her younger sons can’t get there until they’ve straightened out Ortho, and maybe some adjacent towns as well.

Check out Victoria Emerson as she endeavors to combine leading, acting as judge, and being true to herself, with Mr. and Mrs. Sable, called on the carpet for theft:

“Victoria felt heat rising in her ears. ‘Society may have collapsed, Mrs. Sable, but civilization has not. At least not here. Not on my watch. . . . We’re rebuilding from nothing here. Months from now, some of our residents will be thriving, and, alas, some of our residents will have a very long winter. Perhaps their last, but I certainly hope not.’”

Count on plenty of the firefights and explosions and team infiltrations that Gilstrap’s become noted for, a rapid pace of action, direct frontier justice, and hints that the ex-government hiding in a bunker could be a problem—but then again, there are clearly more books in this page-turning series, in which Victoria Emerson can continue to test her strengths against the grim aspects of dystopia, and seek a few minutes (or longer) to savor loyalty, friendship, and perhaps a bit more. If there’s time before her world ends.

This all adds up to why a John Gilstrap thriller, crammed with violence and testing of the soul, might be the perfect work of fiction to sink into in a tough time for the real world.