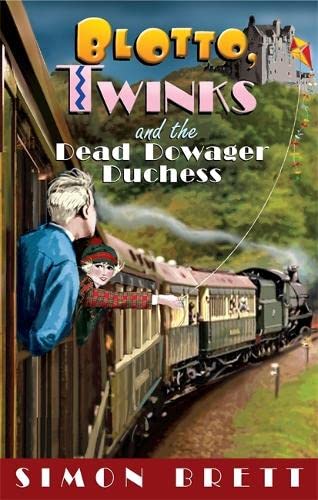 “Highly entertaining and perfect reading for winter nights, Blotto, Twinks and the Dead Dowager Duchess will keep you sweetly engrossed from start to finish.”

Blotto, Twinks and the Dead Dowager Duchess is the second outing for aristocratic siblings, the extremely thick Blotto and his brilliant brainy sister, Twinks. It’s the sequel to Blotto, Twinks and the Ex-King’s Daughter. This time, the investigative duo find themselves spending a long weekend at the Dowager Duchess of Melmont’s stately home, Snitterings, for a party. Blotto is extremely unhappy because he believes his mother intends to finally force him into an engagement with dreadful Laetitia Melmont, the daughter of the household. Despite his skill at trying to avoid Laetitia, she has the knack for always sniffing him out of his hiding hole, in more ways than one. However, far more pressing matters arise when the Dowager Duchess is found brutally murdered in the garden with a pitchfork. Proops, the butler, sends for Inspector Trumbull and Sergeant Knatchbull.

Fortunately for justice, one of the many guests in attendance is know-it-all amateur sleuth, Troubadour Blight, and it’s not too long before he believes he has solved the grisly murder and also knows the identity of the callous culprit. No, not the butler Proops—at least not this time. But a relatively close second.

It’s none other than Corky Froggett, Blotto’s chauffeur, of course; however, the amateur detective’s conclusion does not sit well with Blotto or Twinks, and they set out to not only prove Corky’s innocence, but also apprehend the true killer or killers, in their pursuit of the truth.

So begins the second investigation for the intrepid duo in, one which takes them via an opium den in Limehouse, a Scottish castle and a disused Cornish tin mine, to the final confrontation at the nerve center of the evil League of the Crimson Hand, a group dedicated to removing the aristocracy—by death.

Murders of the rich and famous make great reading, especially if the murder takes place at their palatial homes or castles, and nobody does murder better than Simon Brett when it comes to poking fun wherever possible.

All the usual suspects are here, crammed between the pages: the beautiful young women, and the slightly less beautiful young men—most of whom are inevitably dim; the servants who probably know more about what’s going on, but snobby protocol prevents the upper crusts from asking. And of course, the Forces of Law and Order, usually blundering and blustering their way forward to a back alley of nothingness.