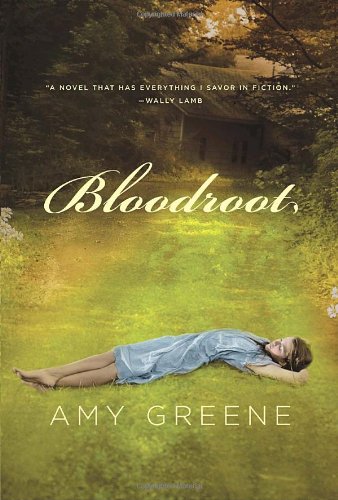 Bloodroot stabs at the heart. Its sap drips blood red with beauty, and, if you use it right, poison. It draws people to the mountains back home, even if they’ve never set foot in the high hills of the Smoky Mountains. It “slows down everything” and casts a spell. So does this story.

First-time author Amy Greene uses a variety of rich imagery to concoct her magic: the colors blue and black and red, high mountain superstitions, a wild mare named Rose, a simple hand-carved box, even the power of the bloodroot itself. She has created a story unmistakably tied to the Appalachian landscape, seen through the eyes of generations of the Lamb family.

Her storytelling seems akin to laying out snippets of fabric at a quilting bee. At first, neither the main character nor the later-to-be-revealed threads are clear to anyone but the story-weaver; they appear as a disjointed jumble of unrelated facts. Her words may, indeed, leave some readers unsettled with a story that doesn’t seem to be going anywhere beyond a tale of a simple Appalachian woman.

Early on, as her reader, one doesn’t yet know the pattern of the quilt. But readers who have the persistence to get past the first seemingly plain chapter can begin to see through the mist the heart of a girl, shaped by her own experiences and history, tossed about by life’s troubles.
Part of Green’s craft is, in fact, achieved through the format of the text itself. The use of three units and an epilogue labeled with a single number and a solitary or twin set of names provides a framework on which to hang this tapestry of Myra’s life. From Grandma Byrdie, to husband John, to children Johnny and Laura—and all the rest—everyone has a story to tell.

Tales begin at the time of the Great Depression and progress through the present day, with each story told from a different individual’s perspective. While reading beyond the first installment, the reader may experience a strong and unending connection to one powerful and intriguing character who eventually emerges. As characters physically move in and out of one another’s lives, Myra is the constant, sometimes predominant one, telling the story herself. Other times she hangs in the background like a lonely, wispy ghost or a witch with “haint” blue eyes. She is never far away. Sometimes secret, sometimes shocking, often surprising, her significance remains shrouded, never quite clear—at least until the book is well underway.

In the end, the reader is left with a glimpse of a complex and disturbed individual, perhaps made so by her beginnings, or perhaps created from her circumstances, the choices she made, and the pressures she endured. Regardless of how Myra or these stories reach their end, one finds a final thread, an inescapable pull of people with common blood “moving in their veins and passing through their hearts.”
Watching this new rising star author to see where her bloodroot takes her next should be interesting.