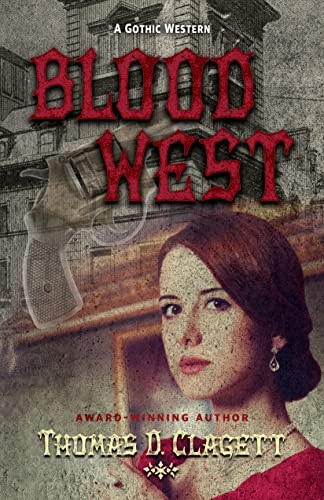 “Fair warning: Lock your doors and turn on ALL the lights before you sit down to read. This book starts out with a bang.”

Horror readers will find plenty of thrills in this story set in 1885 in the Old West town of Las Vegas in Territorial New Mexico where a shape-shifting killer is on the loose. Some say it's a vampire. Other folks say it puts them in mind of a wolf judging by the look of the corpses.

Or what's left of them after the brutal attacks.

"The creature knocked the short man to the ground. Pinned him there. Baring its teeth, the creature sank two fangs into the prey's throat. The prey screamed. Blood gushed into the creature's mouth. Sweet. Warm. The prey's scream turned into a wet gurgle as he tried to fight, legs kicking. The creature felt the prey's fist strike its head. It clamped its jaws tighter to hold the prey down but careful not to rip apart the flesh. . . . Not yet. . . ."

Though no one's been able to get more than a glimpse of the killer, everyone agrees it's smart. Very smart. Smarter than they are.

For that reason, Mrs. Harvey, fearing guests will be frightened away from the elegant Montezuma Hotel, sends word to the Pinkerton Detective Agency asking them to send someone to rid the town of this killer.

They send Undercover Agent Hattie Lawton to investigate. She pretends to be a nurse working for Doc Burwell who cares for patients suffering from consumption staying at the posh hotel, the pride and joy of the Harvey House Hotel chain.

"The Montezuma Hotel stood upon a hillock. Mountains and canyons surrounded it on three sides. A great five-story tower capped by a grand bell-shaped turret rose majestically above the hotel at one end. The sun caught the turret's silvery color, dazzling to the eye. Extending away from the tower was a long façade three stories tall lined with the windows of the guest rooms with a smaller tower fixed to the other end of the façade. A covered porch ran the entire length of the first floor and appeared to extend on around the main tower. The red sandstone walls gleamed. So breathtaking, it was almost too much to take in all at once."\

Hattie's job is not an easy one, complicated further by speculation and rumor. And she gets pushback from some of the menfolk, including the sheriff and the priest. But citizens are terrified, so Hattie persists in her investigation.

The creature is persistent, too, and the killings continue each vividly described by the author.

"Ripping the flesh from the prey's throat, the creature turned and ran into the darkness. It made for the stand of trees and, willing the change, in that very instant, the creature's shape shifted, becoming much smaller, more agile. Spreading its black wings, it flew up over the tops of the trees, disappearing into the darkness, leaving no trail to follow."

Oh! So it's bird, not a wolf? You'll have to read this captivating and twisty story to find out.

Readers will also enjoy the vivid descriptions of time and place, and the numerous historical tidbits dropped seamlessly into the plot by the author.NY Journal of Books review of

Like this: "Telephones and electricity had come to Las Vegas, first town in the territory to have them. The wires attached to tall poles stretched from the telephone exchange building at the end of town out along nearly every street. . . ."

And this: "Telephones and electricity . . . [were] on account of the railroad. The Atchison, Topeka and Santa Fe had brought some good things, and some bad. Like the swarm of thieves, thugs, fakirs, bunco-steerers, and other scoundrels who had descended on the town almost overnight. . . ."

For readers who wonder about fictional characters in a book when the story ends, the author has thoughtfully provided an epilogue that tells what happened to the characters in this book, some of whom are real people in history.NY Journal of Books review of

And be sure to read the very interesting Author's Note at the end of this thoroughly researched book. It's full of information, research resources, and suggested reading about the Pinkerton Detective Agency, the Montezuma Hotel, and the early treatment of consumption (tuberculosis).

Fair warning: Lock your doors and turn on ALL the lights before you sit down to read. This book starts out with a bang.