Blood on the Water: A William Monk Novel 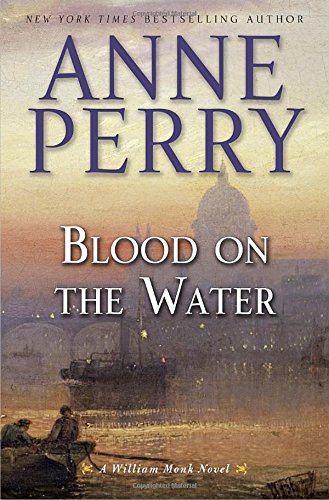 “The series is renowned for its accurate and often devastating presentation of Victorian London—a world of stark polarities between rich and poor.”

The 20th installment of the William Monk novels set in Victorian England starts with a literal bang as Monk witnesses a party boat explode and kill 200 people.

As “Commander of the Thames River Police[, a]ny crime on the river was his responsibility, and this was the worst incident in living memory. . . . Where could he begin?”

He barely asks himself the question before the case is pulled from his force for political reasons. It’s the era of building the Suez Canal—a world game-changer, when important people in multiple countries have their lives and fortunes on the line. The potential political dynamite is as potent as the new invention that blew up the boat.

Yet the Metropolitan Police bungle the investigation, so the case, now stale and muddled, returns to the River Police. Monk would have no chance to solve it if not for the loyalty of his men and unauthorized help from his friends and family.

Hester, Monk’s wife—a nurse who worked with Florence Nightingale in the Crimean War—has access to information never given to the police, through her charitable organization that helps sick prostitutes. And their adopted son, Scruff, once a mudlark, still has access to the secret society of the river.

In previous volumes the little family has been helped by their dearest friend, the brilliant barrister Oliver Rathbone. But he was disbarred in the previous volume, and for the first half of this one remains off stage. He returns in time to help behind the scenes, driven by a need for “Purpose. Perhaps it was the next best thing to happiness” and “To use the skills nature had given you was necessary, as a horse must run, or a bird must fly.”

Together again, the team fights to prevent the collapse of the entire British judicial system (versus their usual mission of saving an individual from the gallows). A single paragraph captures both the underlying societal truths forming the basis of the series and the difference in this particular volume:

“She looked across at the faces of the jurors: twelve ordinary men. Except, of course, that they were not ordinary. They must by law all own property, which ruled out far more people than it included. They must be worthy citizens, themselves above reproach. That ruled out a few more. All women were excluded automatically. Was this truly a jury of peers? Hardly. Did it matter? Probably not at all in this case. For once there was no social division over the crime, no sympathy at all for the accused, no difference in the rage or the pain between rich and poor, man or woman, churchgoer or atheist.”

But as always, the truth comes out through dramatic court scenes.

These books are deeply moral, and the plots are about righting a grievous wrong. If that can’t be done, then Hester, Monk, and Oliver struggle with all their heart and soul for justice—a slippery concept, which the characters spend book after book exploring. This time Hester puts a finer spin on it: “I prefer the word ‘justice’ to ‘vengeance.’” It’s a close call sometimes, and the distinction can mean life or death for the right or wrong person.

The series is renowned for its accurate and often devastating presentation of Victorian London—a world of stark polarities between rich and poor. It also, in offhand mentions woven through the narrative, shows the helplessness of women during the period. The party boat explosion illustrates this with chilling simplicity:

“All the survivors he spoke to were men, except one. It was more than just greater physical strength that had saved the men rather than the women. It was the complete inability of the women to fight free of the heavy, wet skirts wrapped around them.”

Monk, Hester, and Oliver aren’t superheroes who can overcome societal forces. But they do whatever is humanly possible to save one person or situation at a time; and in Blood on the Water they speak for a boatload of people as well as the unjustly accused.