Blood at the Root: A Racial Cleansing in America 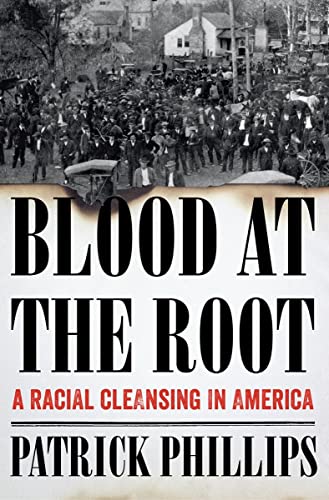 Local history can be rich, exotic, complicated, personal, and dark but especially when an incident like the Scopes Monkey Trial serves as an “island” in regional and national social currents. Those “ghosts” are a potent tool for exploring of problems that haunt the present.

Nationally recognized poet Patrick Phillips turns historian of North Georgia’s legendary Chattahoochee River to write Blood at the Root, about the 1912 murder and rape of Mae Crow, a white woman in Forsyth County. Fully armed Georgia National Guardsmen were needed to allow even an anything but fair trial to take place.

Of the black men accused of the crime, one suspect was lynched and two others were eventually executed after conviction by an all-white jury. The author describes the prosecution and the defense respectively as “one stocked with talent, power, and experience, the other with law students and over-matched small town attorneys.”

White citizens forced out more than 1,000 African Americans in order to all but completely racially cleanse Forsyth County. Whatever the fleeing families left behind, the white community took “in what became a once-in-a-lifetime opportunity.”

Phillips composes a dramatic, honest, and gripping narrative, but his book is not just another account of an outrageous race based American lynching. He carries the story to the present including Forsyth County’s infamous troubles that garnered negative national press in 1987.

In that year, the author's boyhood home of Forsyth County became a modern symbolic holdover of white bigotry, fear, and supremacy. It defied the progress Americans want to believe we have achieved in race relations.

Ethnic and racial cleansing is a fundamental part of American history from coast to coast, part of our English colonial legacy. Forsyth County, going back to North Georgia's Cherokee Removal of 1838, is a particular example but not an exceptional one.

Fear of racial violence was instilled in generations of the local people far beyond anything in reality and is the real great overriding evil in this story. It justified, in white minds, violence against the Cherokees and later the slave patrols.

The author similarly implies that the local slave children with white fathers was the result of rapes that to some people justified what happened to Mae Crow in 1912. Conversely, to Forsyth’s white community, “the lynching had been not a gruesome communal murder but a case of old-fashioned frontier justice.”

The author makes the extra effort that this story deserves. For example, he relates how white night riders in neighboring Hall County were brought to justice by white law enforcement in 1912. “Georgia was still Georgia” but in Hall County “it was still a crime to kill a black man.”

The 1912 crisis extended beyond Forsyth and Hall Counties. In nearby Pickens County in 1912, Sam Tate fought to prevent anyone from intimidating his black marble workers. Connections between major players in the Crow trial to the later lynching of Leo Frank are also made.

The book is thoroughly researched and documented, but writing such a story has particular difficulties. A scholar wants to avoid making lynching and kangaroo trials look justified by the crimes committed. Phillips succeeds in Blood at the Root where authors of books on the more infamous Leo Frank lynching, for example, often fail.

So many books on lynching exist that one wonders if writers will run out of snappy titles. The quality of these histories varies widely and sometimes includes the poorly researched and prejudiced. Sometimes authors protect sensibilities in the present rather than to get to the truth and what it means.

As a consequence, the more famous the illegal execution, the further from the unbiased conclusions a book tends to be. It is hard to just argue that even guilt does not justify lynching.

Blood at the Root does not have that problem. It is a valuable, highly readable history that is also an adventure into a dark local episode in American history.